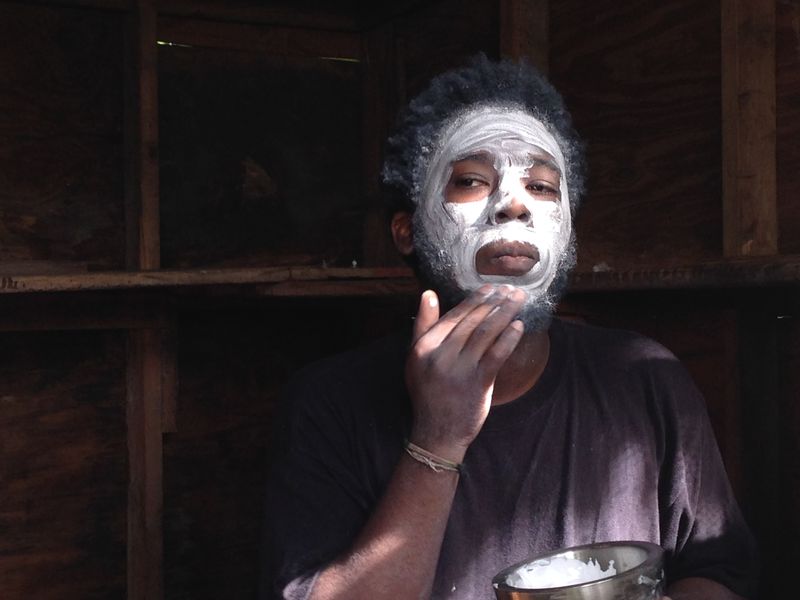 The annual Thursday morning brunch at Casalin in Wynwood is always a bucolic respite from Basel bustle. Sponsored and hosted by Lin Lougheed in his garden recreation of a pre-European pine rockland landscape, the Yard@Casalin showcases New World School of the Arts student artists - as well as cafecitos, fresh guarapo juice and pastries. This year was mostly performance pieces. Blonde, demure-faced Bernadetta Majauskaite wandered the grounds in a beaded white wedding dress (bought at Goodwill), her train trailing in the mud, humming a hypnotic melody as she "married" people by tying a strip of lace around their wrist, 100 times for A 100 Weddings. Skyler Nador tap danced on a platform covered in white paint in Colored Emotions.

But other pieces shadowed the sunny garden. Eddy Jean-Joseph,18, sat in a tiny dark shed, smearing white paint on his dark face, an ominous figure. The untitled piece was inspired by the minstrel show practice of blackface - when white performers smeared their faces with black makeup for a caricature of African-Americans - and by a newer version of cultural co-optation. "It was inspired by all these racial incidents that were happening, celebrities taking pieces of African-American culture," said Jean Joseph, who grew up in Little Haiti. Like Miley Cyrus wearing her hair in dreads. "I didn't like that - how some people pick and choose what parts of other people's culture they're going to put on," he said.

The three men in black Tshirts picking up trash about the yard would ordinarily have been invisible, or at least ignored. But this morning they took on symbolic meaning courtesy of the phrases on their black t-shirts reading "I am an immigrant/alien/undocumented cleaning the yard." Alian Martinez, 27, who arrived from Cuba just two years ago, looked to his neighbors, for the literally named Immigrant Cleaning Yard. "I'm very curious about how power is expressed in the relationship of work in this country, between employer and employee," Martinez said. "It doesn't matter how difficult the work can be, to realize it there always has to be money to pay for the effort. He's also fascinated by the politics and anger around immigration. While he thought there should be some controls on immigration, Martinez is puzzled at the hostility towards those who come here.

"Immigrants do the dirty work that no one wants to do," he said. "If America gets rid of all the immigrants, they'll lose that support."

The three men bringing his piece to life were Martinez' neighbors in Northwest Miami, and one really was undocumented, and the other getting his papers. Asked if they were embarrassed to wear labels proclaiming their status, Martinez said no. "They just asked how much they were getting paid," he said, pulling cash out of his pocket - $60 for each man. "It's more than they usually get."

One of them, Israel Menduina, with the "immigrant" t-shirt and a cap reading "native pride," was actually the U.S.-born son of a Cuban exile. "Immigrants come to work, to make an honest living, to take care of their families," he said. "I don't see nothing wrong with that."