Art Basel: Mayor Levine lost his voice from "too much Baseling" 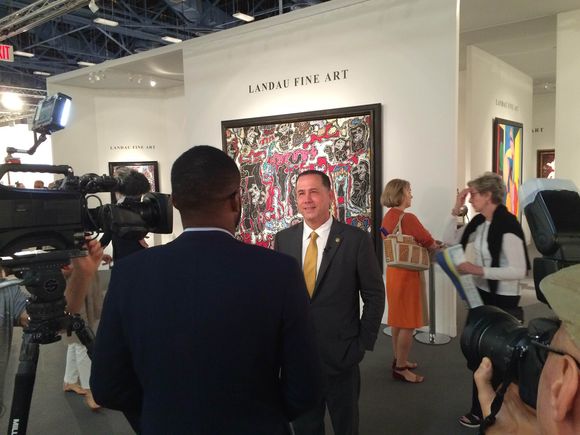 Mayor Philip Levine, fresh off a successful re-election campaign, was on hand Wednesday morning to open up the Art Basel VIP preview at the Miami Beach Convention Center.

The mayor spoke in a strained voice, which he confessed was a little hoarse "from too much Baseling last night."

Levine attended a party for the opening of the Faena Hotel in mid-Beach, where he gave the key to the city to Argentine developer Alan Faena, and also dropped by the Delano.

Although some art-goers have expressed party fatigue, Levine said he's ready to go.

At Basel, the mayor said he's most interested in checking out Latin art.

"It's so expressive and colorful and symbolic of the Latin American spirit, which has helped give Miami Beach so much energy," he enthused.

Levine will be keeping a special eye out for works by Cuban exile artists Julio Larraz, Tomás Sánchez and Cundo Bermúdez, all of whom he collects.

Would he be looking to buy?

Posted by Miami Herald at 11:49 AM in Art Basel Miami Beach | Permalink