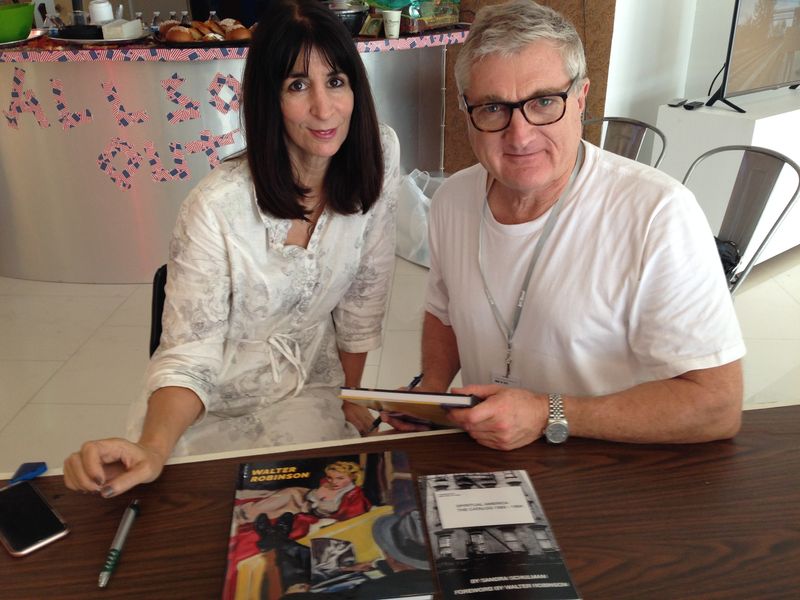 Art writer and gallerist Sandra Schulman, and writer and artist Walter Robinson may have been sitting in a show of South Florida artists, the 100 Degrees in the Shade gallery in the Design District, on Thursday morning. But the book they were there to sign (and promote) told of a very different place and time. Still, Spiritual America, a slender little volume about a short-lived gallery on New York's Lower East Side, offers some striking parallels for Miami's art scene - in the story of a pivotal moment in the history of art, of some very famous artists, and of how place and culture and gentrification mix.

Schulman had just graduated from college in the spring of 1983 when she joined her friend Kim Fine in running Spiritual America, a tiny gallery in the front of Fine's apartment on Rivington Street, one of the funkiest, druggiest parts of the Lower East Side. Fine had started the gallery after artist Richard Prince, whom she was dating, was dumped by his Soho gallery, Metro Pictures, for proposing a show consisting of a single photograph he'd taken of another notorious photograph - Gary Gross' shot of a naked ten year old Brooke Shields.

"Richard brought [Metro] the Brooke photo and says this is my next show, it will be the biggest thing in the world," Schulman says. Metro didn't buy it - but Prince convinced Fine to paint the front of her apartment black and light up his photo of a photo, called Spiritual America - a comment on commercialization and sexual exploitation. Voila, instant gallery. When Gross served Prince with a copyright lawsuit the next day, the artist lit out to California - leaving the new gallery behind.

Over the next few months Fine and Schulman did a New Year's Eve show of murals by Robinson, and a group show with Jeff Koons (Fine was seeing him too), Cindy Sherman (Schulman owned one of the early film still photos, a gift from her internship at Metro), and Louise Lawler. Their backer (with the enormous sum of $400 a month, plenty for paint, invites and champagne) was Schulman's friend and sometime boyfriend Arturo Vega, who designed the graphics for the Ramones, CBGB's, Blondie and other now legendary punk figures.

"Sandra's book is fascinating because it tells the inside story of an artwork that was a milestone in post-modern photography," says Robinson, who wrote a review of the Prince photo "show" for the East Village Eye. The Prince photo was a pivot point for post-modernism, for the appropriation and re-framing of mass market and media imagery. "It's the mechanics behind the myth, that detailed eyewitness history."

Of course, nobody on that block packed with artists and drug dealers was thinking about milestones. They were getting high, going clubbing, making art, sleeping with each other, inventing fashion from trash and cast-offs. "I didn't know I was making history," says Robinson, who's now concentrating on painting, with three pieces in the giant Larry Gagosian-Jeffrey Deitch Unrealism show in the Design District. "I was just going with the flow, having fun."

So was Mark Kostabi, an East Village artist who went on to become one of the most successful and famous figures from that era - and who stopped by to see his old compatriots. Back then he lived next door to Spiritual America. His landlord was another known local artist, Richard Hambleton. Jean-Michel Basquiat used to visit Kostabi's brother's roommates, in the same building, to exchange paintings for drugs. Outside was a busy open air market for heroin and cocaine. The apartments were freezing in the winter. It was perfect.

"As soon as I moved to the East Village my career took off," says Kostabi. "I was always bumping into dealers, artists, collectors. New York downtown in the 80's was a non-stop party.We had the freedom and encouragement to be different and unique. There was no internet, people weren't sitting at home staring at a screen, but word got around by word of mouth, because everyone was out and about all the time."

Spiritual America lasted just five months, from the end of October 1983 to the end of March 1984. Fine and Schulman didn't sell a single piece. Of course, now Koons, Prince and Sherman are art stars, and appropriating media imagery is establishment. "I knew these people were onto something," Schulman says. "But no one was getting it. All this stuff was starting on the downtown scene and just starting to creep out there. I just thought it would happen sooner."

But she has no regrets. "It was a like a secret club," she says. "Eating ice cream in that freezing apartment, going out to clubs. We'd put on music and dance and talk about art and our adventures the night before. There was electricity in the air."