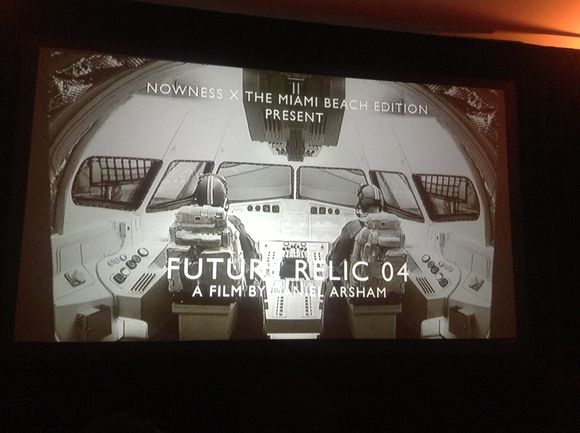 Think Ray Bradbury with a twist of sardonic humor and you’ll have an inkling of what the latest installment of Daniel Arsham’s sci-fi film “Future Relic” is about.

Arsham, the artist affectionately embraced as Miami’s native son, unveiled “Future Relic 04” at the Edition hotel on Miami Beach Thursday night. Prior to viewing the film, guests had their pick of select drinks by Absolut Elyx, such as the Edition Pineapple, which featured salted caramel syrup and pineapple puree, along with a sprig of rosemary that bartender Johan Vasquez set aflame with a mini-blowtorch. And after the 12-minute clip, the audience repaired to the hotel's basement bowling alley and ice rink.
Arsham, who co-wrote the script with screenwriter Timothy Stanley, says the film will have nine segments, which will eventually be released as a feature-length film next year.

The installments are shot out of sequence, Arsham says, “primarily due to access to the talent” – such as Academy Award nominees James Franco (Best Actor for “127 Hours,” in which he portrayed Aron Ralston, who in real life cut off part of his arm after it was pinned under a boulder during a hiking accident) and Juliette Lewis (for her role as an innocent teen in “Cape Fear”).

Watching the segment is a bit like trying to define an elephant when you can only see its tail. But the film hints of a pending cataclysm that causes Suplee to periodically swig amber liquid from a flask and eventually leave his pilot’s seat to dance to Jerry Lee Lewis’ “Great Balls of Fire.” This occurs after he and his co-pilot witness massive calving of icebergs everywhere they look.

If you are mystified by the meaning of that sequence, you are not alone. Even the emcee for the evening’s private viewing was at a loss. When the lights came up, Jefferson Hack – media mogul and former mate to supermodel Kate Moss – told the audience, “Like most of you, I have no idea what happened. We’ve just been given a tease.” Hack has been teasing the Internet audience by presenting the installments on the web through his company, Nowness, and plans the do the same for this latest installment.

This method of early distribution affords Arsham the ability to build a fan base and continues to keep everyone guessing as to the plot of the film, which showcases his artwork made to resemble everyday items such as cameras and cell phones.

“I’m releasing [the film segments] as I make them,” Arsham says, adding that although the latest segment is the fourth so far, it actually will appear at the beginning of the film once all the pieces are spliced together.

When that happens, look for additional actors of note, such as Mahershala Ali, who plays lobbyist Remy Danton in the American version of “House of Cards” and Belgian actor
Ronald Guttman, who brilliantly plays characters both sinister and suave, that appear in a variety of works, ranging from “The Hunt for Red October” to “Mad Men.”

Posted by Miami Herald at 02:35 AM in Private / VIP Events | Permalink