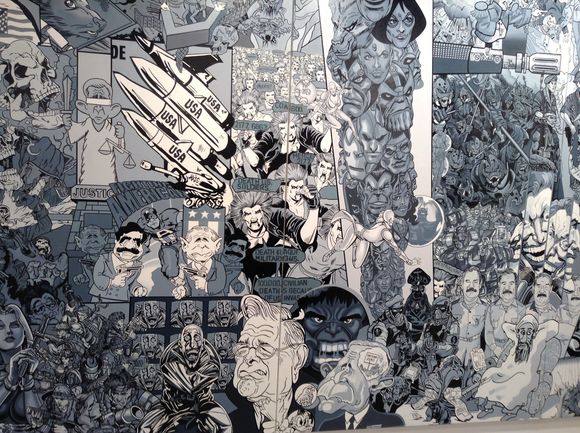 There were many works at the Art Basel fair that conveyed the tenor of the times -- a yearning for peace, a disdain for war.

Galerie Perrotin brought a monumental work by ERRO, an 83-year-old postmodern artist born in Iceland and now living in Paris.

Gallery owner Emmanuel Perrotin says the artist has been undervalued, but he expects that to change, particularly when people revisit the work currently on exhibit at his booth, "God Bless Bagdad".

"We know it will be a rediscovery for many people," Perrotin says.

The mural on three panels spans roughly 10 x 16 feet and shows then President George W. Bush and Iraqi President Saddam Hussein and missiles of mass destruction, as well as Iranian ayatollahs, one with the name "Cabu" written on his turban. The artist was prescient, as Cabu was the Charlie Hebdo cartoonist who was killed by terrorists earlier this year.

The mural -- although created in 2004 -- illustrates the ongoing terror threat in Paris and the rest of the world.

Galerie Perrotin, which is located near where the most recent terror attacks took place in Paris in November, had decided to bring ERRO's mural earlier in the year.

"We arranged the shipping of this work before the attack," Perrotin says, adding, "We were affected by the attack. The first week we had 50 percent less visitors. We are all a target."

"We all know people who died," she says. "We all have a friend who has friends who died."

Posted by Miami Herald at 06:14 PM in Art Miami | Permalink