With three days left in the session, Rivera was successful in getting his "Sellers of Travel" bill passed through the legislature Wednesday night. The measure requires travel agencies selling trips to countries deemed "terrorist nations" by the U.S. State Department, to register with the state for a fee of $2,500, and place up to $300,000 in bond money.

Rivera's bill made its way through the session, despite numerous tongue lashings from Miami based travel agents lambasting the measure as "pandering" during committee meetings, and some legislators questioning the need for state regulation of a business already regulated by the federal government.

The senate version of the bill, sponsored by Sen. Carey Baker, a Eustis Republican, passed in the Senate earlier Wednesday afternoon, positioning it for final passage in the House.

Also chiming in on the bill during debate, was Rep. Eduardo "Eddy" Gonzalez, a Hialeah Republican, who was born in Cuba but left the country as a youngster. Gonzalez said the bill was necessary to make it harder on Cuban visitors opting to only stay in the country for a couple of months.

"We should make it as difficult as for those people to go back," Gonzalez said. "People who want to go back after three or four months should stay there."

The measure comes a day after Cuban government officials announced a 15% hike in foreign tourism to the island.

The Democratic party has been running commercials featuring a speech in which John McCain said of the years American troops could be in Iraq: "Maybe a hundred...that'd be fine with me."

What McCain really said:  "That's be fine with me -- as long as Americans are not being injured or harmed or wounded or killed."

So for a campaign that has complained incessantly about McCain's words being taken out of context, it took a few liberties of its own when it dispatched rave reviews of his health care plan unveiled Tuesday in Tampa.

What the campaign said The Wall Street Journal said: "John McCain delivered another speech yesterday on health care that offered a sophisticated set of policies that could lead to some of the most constructive changes to the system in decades."

What the Wall Street Journal really said: "For a man whose heterodoxies have no doubt triggered GOP heartburn, John McCain delivered another speech yesterday on health care that offered a sophisticated set of policies that could lead to some of the most constructive changes to the system in decades."

Very subtle. Check out the "maybe a hundred" moment here.

Elections bill could be in trouble because of Robaina

The Florida House unanimously approved an elections bill on Wednesday that eliminates two types of photo ID acceptable at the polls - and lifts a $100 cap on some campaign contributions to candidates for Agriculture Commissioner.

But it was Rep. Julio Robaina's move at midnight on Tuesday - where he amended the bill to lessen the penalties for those who fail to put a disclaimer on some campaign ads - that could scuttle the entire legislation.

Sen. Lee Constantine, the chairman of the Senate Ethics and Elections committee, said on Wednesday that the Senate would not take the amendment on SB 866 and send the bill back to the House. He also said there was nothing in the measure that was desperately needed for the 2008 presidential election.

Secretary of State Kurt Browning wanted lawmakers to change the state's manual recount law in the elections bill, but he agreed to stop pushing for the change after elections supervisors from urban counties such as Miami-Dade raised concerns about it. Browning wanted to require a hand count of all ballots in all close elections. Current Florida law says that manual recounts will only be done of "overvotes" and "undervotes" and not all ballots cast in elections.

The bill now includes the ag commissioner provision, the change in photo ID law, and some tweaking of Florida's controversial "no match" provision that is the subject of a lawsuit.

Sen. Carey Baker announced tonight that he was stripping down the most controversial items in his massive transportation bill, leaving only the bare minimum issues and eliminating out CSX.

"We have a lot of important issues in that bill that we’d like to ensure passage,'' he said. "So this will help sort of clean that up to help move through that.”

Taken out was the agreement to pay CSX $450 million to buy 61 miles of rail line for an Orlando commuter rail, limitations on liability for CSX, the $2-a-day rental car surcharge to expand and avoid service cuts.

Left in was a plan to allow Miami-Dade County and the City of Miami the ability to regulate mural-sized advertising on high-rise buildings; a bill to penalize drivers charged with Road Rage, and a 25 percent increase in state-run toll roads; and $500 million to lease Alligator Alley .

Sen. Dan Webster, the chief sponsor of the CSX deal in the Senate, said the decision to abandon the commuter line deal was borne of pragmatic politics. "Time is running out,'' he said. "I don't know if there's enough time even now.'' He admitted he wouldn't get the two-thirds vote needed to put the House CSX bill on the calendar. He said he still wants the Alligator Alley lease and toll increases. "I hope we can get them.''

The debate isn't quite over. Sen. J.D. Alexander said he will propose an amendment to Baker's transportation bill that will strip the sovereign immunity protections from Tri-Rail as well as the $45 million in state funding to "talk about the issues and balance the debate,'' he said.

Orlando's coveted commuter line has had a train wreck. The Senate has packed together so many education reforms into one that the House appears unwilling to take it in one swallow. House and Senate leaders have spent the day trying to piece together the ailing insurance bill and it's now on life support. And the budget, well, that may be all they get done this week.

Then again, it is Wednesday and, as any capital observer knows, important legislation always falls apart -- sometimes very theatrically -- before it comes together.

That's the view from the 5th floor of the Capitol at this reading. Stay tuned. More to come.

The showdown between the League of Women Voters and Secretary of State Kurt Browning will be on hold until this summer.

Both sides filed a statement in federal court in Miami on Wednesday that states that Browning has promised to not enforce a new voter registration law until at least July because the department is drawing up a rule. Because of that attorneys for the League say there is no need to ask for a federal injunction against the law, which imposes penalties on third-party groups that fail to turn in voter registration applications within 10 days after someone fills out the form.

Jennifer Krell Davis, a spokeswoman for Browning, said the agreement is not that big a deal because the Department of State did not intend to start enforcing the law anyway until it had passed a rule.This does not, however, deal with the underlying lawsuit in which the League wants the voter registration law declared unconstitutional.

Packing heat in the park

The US Interior Department is asking for public comment on a proposal to let parkgoers carry loaded firearms in national parks and wildlife refuges.

The proposed update is available for comment at www.doi.gov. Interior notes there'd still be limits on poaching and target practice -- and a prohibition on carrying firearms into federal buildings.

Under the changes, no one would be allowed to openly display weapons, but people with concealed weapons permits could carry loaded guns. Others could possess them in parks if they are secured in a case or container inaccessible to minors.

National Park Service rules already allow guns -- but only unloaded and stored so they are not "readily accessible." Gun-rights advocates argue that restriction infringes on their ability to defend themselves.

The government is giving everyone 60 days to voice their opinion. So fire away.....

Posted by Lesley Clark at 3:45 PM in Congress | Permalink | Comments

McCain scoops up $5 million in 48 hours

Not too shabby for a candidate who at one point last summer, couldn't even raise a quarter of a million dollars over three months.

Among the reasons for the big bump: McCain is wearing the mantle of the presumptive nominee. Major donors for his former rivals are coming on board. And he has set up "victory fund'' that allows donors to write checks for as much as $70,100, even though individual contributions are capped at $2,300.

Here's how it works: The first $2,300 of the check goes to the campaign, while the rest is spread between a federal election compliance fund, the Republican National Committee and accounts set up in four other states with limited fundraising networks.

Reflecting Florida's strong fundraising network and its must-win status in November, McCain has also set up a separate account in the state for future fundraising swings.

But, you say, I thought McCain was a crusader for campaign finance reform? Yeah right, says a Democratic-leaning watchdog group, the Public Campaign Action Group. Check out their talking points here: Download background-on-McCain-Loophole_002.pdf

Senators said good-bye to Sen. Steve Geller Wednesday, as they paid their respects to their departing Democratic leader with a few compliments -- and a bit of ribbing.

As they said farewell, Geller's fellow senators joked that Geller, of Cooper City is a loyal friend known for his dedication, gaming law know-how and his enjoyment of "holding court."

"If you've never done a fundraising call with Sen. Geller it's actually pretty interesting," joked Sen. Dave Aronberg, D-Greenacres, recalling Geller's help during his campaign. "You call up someone, 'Hello this is Sen. Geller. Can I please speak to Howard? Howard, hey, there's a young man running for office here, Aronberg. He's a good guy. He needs your help. But enough about him..."

But it wasn't all jokes. Senators also praised Geller for his hard work, knowledge and the legislation he had sponsored on behalf of children. Geller passed a bill as a freshman state representative to regulate amusement ride safety, and this year, in the Senate, he is sponsoring a bill to mandate health insurance coverage for autism treatment -- which was being debated on the House floor while Geller said his good-byes.

Geller came to Tallahassee as a state representative in 1988. He plans to run for the Broward County Commission when his term ends this year.

"Howard the coward! Count our votes!"

"I'm one of those senior white women and we're not invisible anymore," said Carolyn Greer, 59, of Ocala, a registered independent who said she had hoped to vote for Hillary Clinton in November. Greer, like Clinton, says she wants Florida to count "before there's a nominee, not after.

"If they wait til after, what does it matter?" Greer said. "If he waits til after a nominee's been picked, then this old gal is going to vote Republican. Because (John) McCain is at least a patriot."

Dean wasn't in town, but DNC staffers met with several protestors and handed out flyers in English and Spanish noting that "on April 2nd, in front of this very building," Dean vowed to ensure that the Florida delegation is seated at the convention in Denver.

The Republican Party of Florida didn't waste time in poking fun at the Democrats' debacle. (Florida Dems lost all their delegates for participating in an early primary; GOP'ers lost only half their delegates. 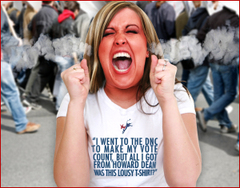 Here's some video from the event: Anyone look familiar?