"It is with great sadness that I inform you, that our friend and colleague Stan Mayfield passed away this evening. He was surrounded by family and friends. I will notify each of you on funeral arrangements, as soon as they are finalized." 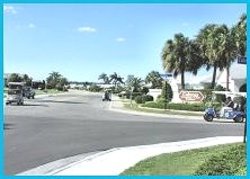 First stop: Sun City Center, a retirement community between Sarasota and Tampa that leans Republican but where many residents have had it with the current administration.

Take Don Schuster, who should be an easy vote for Republican John McCain. He's an 80-year-old Korean War veteran and registered Republican who can't remember the last time he voted for a Democrat for president. Yet he still hasn't settled on the Republican nominee. Maybe it wasn't so crazy for Democrat Barack Obama to to open a campaign office in this community dominated by Midwest conservatives after all.

"In my lifetime I've never seen the swings in the economy that we've seen in the last month,'' Schuster said. "The Republican party has changed in the last eight years. It used to be a conservative, middle-of-the-road party. And they sold themselves out."

In the tit for tat between the Dems and Reps over Belinda Ortiz, et al, here's the Democratic Party's pres statements on the matter:

"Belinda Ortiz's Republican cronies in Tallahassee are already going to bat for her. Rather than investigating or even addressing the serious charges alleged against her, Ortiz had her special interest buddies call in favors to get a partisan Republican Chairman to unilaterally dismiss the complaint. It is shameful that rather than answering questions about her past as a Tallahassee lobbyist, Belinda Ortiz continues the Republican culture of corruptions and cover-ups. Hopefully, the Members of the Senate Rule Committee will put their responsibility of our enforcing Senate rules above partisan political games."

The earlier press statement is below

Sometimes, a press release should be printed in its entirety. Case in point, this Republican Party of Florida presser against Orlando Sen. Gary Siplin, who incidentally still owes Miami-Dade cash for his failed business, Hats in the Belfry. (One note: it bashes him for a felony theft conviction that was overturned):

Tallahassee - Just one day after the Florida Democrat Party and Gary Siplin attempted to make political hay out of a bogus complaint against Belinda Ortiz, their deceptive tactics were exposed by the Florida House.

Gary Siplin is the last person who should be hurling ethics accusations against someone else, noted RPOF Communications Director Erin VanSickle.  While Belinda Ortiz is clearly innocent of these misleading complaints, Gary Siplin is far from being vindicated of his chargesincluding a felony conviction.

Taking advantage of a nave college student, the Florida Democrat Party tried to launch a smear campaign against Belinda Ortiz, who is running for Florida Senate against Siplin, by accusing her of failing to register as a lobbyist.  Almost immediately, the Florida House dismissed the bogus complaints against Ortiz, who has an impeccable record of community involvement and public service.  Meanwhile, Siplin has long, shady history of run-ins with law enforcement, including a felony conviction for grand theft.  Siplin was ordered arrested for failure to pay child support, owing his ex-wife $16,940. (Orlando Sentinel, 09/06/2002)  Additionally, Siplin owes Florida taxpayers $150,000 for a business loan he received from Miami-Dade County (Orlando Sentinel, 05/29/2002) owes more than $65,000 in unpaid federal income tax (Orlando Sentinel, 05/29/2002).

Gary Siplin and the Florida Democrats should explain to Florida taxpayers why they are spending time fabricating complaints against others instead of working to pay back the money he owes Floridians, concluded VanSickle.  A convicted felon who refuses to pay child support simply cannot use the words ethics and culture of corruption and expect people to take him seriously, and both he and Karen Thurman should be ashamed of themselves."

Secretary of State Kurt Browning is touring the Middle East with other elections officials who are all hearing the same thing from soldiers: Allow us to vote -- or at least register -- by Internet.

And while that's a distant (but currently illegal) possibility, Browning mentioned that a new, experimental vote-by-remote system for Okaloosa County has been approved by his office. Called Operation Bravo, the new system would let overseas Okaloosa residents vote via a secure, electronic network.

Groups like the Voters Coalition are no fans. They fear the system is too experimental and too secretive right now. More here on that. Browning said his staff has approved the pilot project, but it's up to military-heavy Okaloosa to implement it. "I don’t think we’re going to commit to internet voting," Browning said, noting that mention of "the world wide web strikes fear in the hearts of men."

Still, Browning said, the call for secure Internet voting is getting stronger.

"We can bank, buy clothes on line, we can shop. But we can't register, we can't vote (online)," Browning said.  "It's something we need to look at."

Hitting back after a week of ads that call him Enron Joe, Joe Garcia is up with a new TV ad that accuses Mario Diaz-Balart of "lying" about Garcia's record and voting more than 90 percent of the time with President Bush's "failed economic policies." His campaign says it began airing today.

Below, check out this harsh ad Republican John McCain is running on local television in South Florida. It accuses Democrat Barack Obama of "playing politics'' and "risking lives'' by voting against paying for the wars in Iraq and Aghanistan. The truth is that Obama voted for military funding until last year, when he and other Democrats opposed it on the grounds that the legislation did not include timetables for withdrawal.

The quickie attack ad contrasts with a two-minute Obama spot running in Florida in which he talks directly into the camera about the economic crisis. Watch it here.

Public Policy Polling, a Democratic-leaning firm, has a new poll showing that, for the first time, Barack Obama opened a slight Florida lead over John McCain: 46-44. But that's within the poll's error-margin, so consider it a tie that's more indicative of Obama's gaining of momentum as the economy slows.

Also, the poll shows Obama has picked up more support among whites, closing a 27 percentage point gap to 11 points.

More intriguing: McCain's pick of Sarah Palin seems to be more problematic these days. Her CBS interview with Katie Couric sure didn't help, nor does the prime-time pounding of McCain on MSNBC, nor did Tina Fey's mocking of her on Saturday Night Live, where some big chuckle-lines were simply verbatim repeats of what Palin had said.

As the economy goes down, the scams against seniors in the nation's eldest state could be on the increase. So state CFO Alex Sink on Tuesday called for a new "Safeguard Our Seniors" task force to propose laws and rules to crack down on financial fraud.

Sink made the announcement with an 81-year-old retiree named David Green who said he was swindled out of his retirement money by two scammers selling bad annuities. "They said they had some information that would be beneficial to me and I naively let them in the house," he said.

Last year, Sink proposed an annuity-fraud bill. But it failed in the Legislature. Sink blamed Metropolitan life and its lobbyists for killing the deal. She said she'd try again and wants to make sure penalties are increased to make it worthwhile for prosecutors to pursue bad actors. Right now, she said, "the penalties are a slap on the wrist."

Posted by Marc Caputo at 11:39 AM in Alex Sink | Permalink | Comments

Putnam: "I consider myself a conservative, but I felt like this intervention was necessary"

House GOP leader Adam Putnam, who voted for the downed Wall Street rescue plan Monday, says talks are "ongoing on Capitol Hill behind the scenes to try and lay the groundwork for a possible deal late this week."

In an interview on Fox News, Putnam said he's hoping Republican opponents will come around.

"I'm suggesting that if Nancy Pelosi feels like she has to pass this only with Democratic votes this bill will get far worse for my conservative friends," Putnam said. "And I consider myself a conservative, but I felt like this intervention was necessary. If they do it without Republican votes, all of the hard-fought accomplishments that we secured in the negotiations will be for naught and they will load this thing up with all of the left wing ideas. That is not an acceptable public policy for the country."

Posted by Lesley Clark at 10:54 AM in Congress | Permalink | Comments