In his rage to find trouble in all things Palin-McCain-Bush, Keith Olbermann's prime time show is getting so partisan that Bill O'Reilly is now* looking like the most down-the-middle guy on cable.

Just take the example of tonight's feature on Sarah Palin's pastor, Thomas Muthee. It's a counterpoint to the Rev. Jeremiah Wright obsession of FOX's Sean Hannity. But where Wright is into black power, Muthee is into witch hunts, apparently. He drove an alleged witch from an African village and, later, laid hands on Palin and rebuked "every form of witchcraft." (Didn't Palin express something later at her church about how different/odd this experience was?)

Gov. Charlie Crist travels to New York again Thursday, this time to attend the annual meeting of the Clinton Global Initiative. He starts his morning at Lou's Cafe, a well-reviewed deli we think in Manhatten's midtown.

His breakfast talk could make a science student silly: he'll talk about solar power, biomass and wind with financier and alternative-energy advocate, T. Boone Pickens then meet with Peter Diamandis, a fellow child of Greek immigrants and a personal spaceflight promoter.

Hastings on Palin and Jews and Blacks (and guns and moose)

CNN is reporting that Alcee Hastings told an audience of Jewish Democrats "they should be wary of Republican VP nominee Sarah Palin because 'anybody toting guns and stripping moose don’t care too much about what they do with Jews and blacks.'

"If Sarah Palin isn’t enough of a reason for you to get over whatever your problem is with Barack Obama, then you damn well had better pay attention," CNN quotes Hastings as saying at a panel discussion about the shared agenda of Jewish and African-American Democrats.

The website says Hastings "was explaining what he intended to tell his Jewish constituents about the presidential race. 'Anybody toting guns and stripping moose don’t care too much about what they do with Jews and blacks. So, you just think this through,' Hastings added as the room erupted in laughter and applause," CNN reported.

Obama: On with the debate

CLEARWATER -- Responding to Republican John McCain's suggestion to postpone Friday's debate because of the economic crisis, Democrat Barack Obama said he didn't think that was necessary.

In a press conference at the Belleview Biltmore Resort where he is preparing for the debate, Obama told reporters:  "With respect to the debate, it's my belief that this is exactly the time when the American people need to hear from the person who in approximately 40 days will be responsible for dealing with with this mess...It's going to be part of the president's job to deal with more than one thing at once.''

Lincoln Diaz-Balart is up with his second ad of the campaign and it's proof positive the gloves are off. The Republican accuses rival Raul Martinez, the former mayor of Hialeah, of using public coffers to enrich himself -- and appears to insinuate that Martinez was involved in drug trafficking -- because he appears for a few seconds in the documentary Cocaine Cowboys. (The segment was about corruption in South Florida, the filmmakers say -- Martinez wasn't mentioned by name. Martinez's camp says the ad is "sleazy" and full of lies.

The Martinez camp notes that WPLG-Channel 10 has sought to truth-squad the ad, noting that it doesn't tell the whole story by failing to mention that Martinez's federal racketeering conviction was reversed on appeal and the government dropped the case after two subsequent trials ended in mistrials.

Republican John McCain today called on Democrat Barack Obama to jointly suspend their campaigns this week, including postponement of the Friday debate, to allow them to focus on a the economic crisis. Obama thus far as agreed to issue a joint statement on the economy but told the Associated Press he is inclined to go ahead with the debate.

Obama campaign spokesman Bill Burton said in a statement that "at 8:30 this morning, Senator Obama called Senator McCain to ask him if he would join in issuing a joint statement outlining their shared principles and conditions for the treasury proposal and urging Congress and the White House to act in a bipartisan manner to pass such a proposal.''

McCain called back at 2:30 this afternoon, and agreed to join Obama in issuing a statement.  He then was the first to notify the media, calling for a suspension of the campaign and issued this statement:

"It has become clear that no consensus has developed to support the administration's proposal,'' McCain said. ``I do not believe that the plan on the table will pass as it currently stands, and we are running out of time.''

He stressed the urgency of responding quickly: "We must pass legislation to address this crisis. If we do not, credit will dry up, with devastating consequences for our economy. People will no longer be able to buy homes and their life savings will be at stake. Businesses will not have enough money to pay their employees. If we do not act, ever corner of our country will be impacted. We cannot allow this to happen.''

Leon County Election Supervisor Ion Sancho said he almost "flipped out" this morning when Florida Secretary of State Kurt Browning's office sent him an email saying it can't handle the late-season flood of new voter registrations that must be checked to comply with Florida's so-called "no-match" law.

Browning, too, flipped out, saying Sancho was "confused" and full of inaccurate "conspiracy." Browning said the email concerned new voter registrations the state has received that normally are processed by counties anyway.

"He wants to connect A and B and they're totally unrelated," Browning said. "He has his pants all wadded up about no match and he does stuff like this... and I've had it."

Here's what the email says:

"Since June 2008, the DOE has processed 30,308 applications and processed over 62,000 verifications.  In the last 10 days, we have received an unusually high volume of voter registration applications.  And yesterday, we received over 25,000 applications in just that day, raising our total in-house number to over 32,000 applications.   We have hired 25 additional OPS personnel to process voter applications in 12-16 hours shifts and continue to aggressively hire additional personnel.   Despite these additional hires, we will need to forward many of these applications to the counties of registrants to ensure they are timely processed.   Therefore, the DOE will be sorting the applications that we believe we may not be able to process within the statutory time frame and sending them to the particular county in which the registrants reside."

Waiting for Obama in the eye of the storm 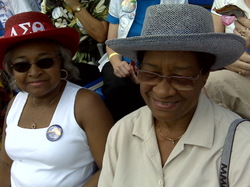 DUNEDIN -- Annette Faison, left, is a 70-year-old retired teacher at the eye of the 2008 storm: Florida's mid-section is the hardest-fought battleground of the state. No wonder Democrat Barack Obama chose to put up stakes in this area for three days while he prepares for Friday's debate with Republican John McCain.

"It's very significant that he came to this area because he has a real chance to sway some people,'' said Faison. "Here we have a large conglomerate of all types of people."

Sylvia Goss, a 72-year-old retiree in the gray Panama hat, said she knows she's at the center of the action because of all the ads she sees on CNN.

"I watch them all day, every day,'' she said. "I want to hear what they have to say, but I will be glad when it's over."

Obama is scheduled to headline a rally here in about one hour.

Posted by Beth Reinhard at 11:59 AM | Permalink | Comments

After launching an Internet attack on state Sen. Jeff Atwater, Florida Democrats have taken to the TV airwaves with an ad blasting Atwater for a 2006 insurance vote.

The cable advertising buy now running in Atwater's coastal district spoofs the Academy Awards, presenting Atwater with the award for "Best Insurance Hypocrite." The TV spot accuses him of taking on insurance companies in his TV ads while voting to raise insurance rates in 2006, citing his "yes" vote on SB 1980.

The ad comes on behalf of Democratic challenger Linda Bird, a political newcomer who hopes to unseat the North Palm Beach Republican and incoming Senate president. It also appears on the Dems' website www.senatorjoke.com -- a tongue-in-cheek jab at Atwater's own campaign site www.senatorjeff.com.

So far, both political parties have funneled money into the race for the coastal district that runs from Fort Lauderdale to northern Palm Beach County.

In addition to the website and Atwater attack ad, the Democratic Party also has donated $33,800. The Republicans have given Atwater $218,600 for campaign staff, polling and other campaign expenses.

But Atwater currently has a massive fundraising lead. According to the most recent fundraising reports released Friday, Atwater has raised more than $2.4 million, including loans and in-kind donations.

The Republican National Committee's chief legal counsel, Sean Cairncross, said ACORN (due to loads of controversial voter-reigstration issues throughout the nation) was "quasi criminal" and said "these are the friends and allies of Barack Obama," a former community organizer who did work for ACORN in Illinois in the past.

ACORN's chief spokesman, Brian Kettenring, responded that Republicans and John McCain, whose campaign had attacked ACORN earlier in the week, were "trying to suppress the votes of minorities and new voters."

Hettenring said the group had already fired the petition gatherer linked to the cases Ertel was questioning. He said the group new the registrations were suspect and flagged that issue to the Orange County elections supervisor where the case originated. ACORN, he said, was required by law to submit the cards, regardless of what ACORN thought of their validity.

After Orange County imaged the documents into its system, it sent them to Seminole. But the sheet flagging the problem was detached in the process. So Ertel didn't see it. He did see a problem, though, when he checked the registration himself.