Dinner with Charlie, Ray and Jeff: 'We work as a team 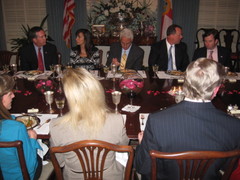 It was a bit of calm before the storm this week, as the Republicans will be sworn in Tuesday and then await bad economic news on Friday when state revenue estimators prepare their latest forecast for how far state revenue is dropping.

Also attending were Lt. Gov. Jeff Atwater and his wife Cyndie, chief of staff Eric Eikenberg and his wife Tanya and communications director Erin Isaac. Atwater’s family included his wife, Carole, his mother, Patricia Atwater, and his children Amy Leigh, John, Amanda and Courtney. Sansom was accompanied by his wife, Tricia, and their daughters Jessica, Carlee and Julia.

Sansom blessed the dinner of swordfish and rice pilaf, asking God for "wisdom beyond our understanding"  and to “give us the calm that he people of Florida expect.”

Kottkamp commended Atwater and Sansom, saying, "We love you as people" and described them as "two decent hard-working guys" who are "products of the Legislature." Indeed, the two legislators joked during dinner about how they met: as alternating chairmen of the Joint Legislative Auditing Committee in the 2003-2004 term.

“I had no intention of ever doing this,’’ Atwater said. “Neither did I,’’ Sansom replied.

Dinner conversation ranged from FSU football to the unseasonably cold weather to the staggered terms of state senators to Sansom's daughter, Jessica, who's studying -- gasp! -- journalism at Samford University in Birmingham, Ala.

At the end of the meal, Crist introduced Atwater and his mother, Patricia, to tell the story of her flamboyant grandfather, Gov. Napolean Bonaparte Broward, who was governor of Florida 100 years ago -- from 1905 to 1909.

The Democrat ran guns to freedom fighters in Cuba at the turn of the last century and, so the story goes, turned down an offer to be the vice presidential running mate of one of Crist's heroes, Theodore Roosevelt.

“He said, ‘No, I don’t want to leave Florida,’’’ Patricia Atwater said.

“His entrepreneurial spirit is what led him to public office – Florida’s fighting Democrat,’’ Jeff Atwater added. “So we have a great bit of bi-partisanship too.”

“That’s wonderful,’’ Crist said. “We work as a team. That’s the only way we’re going to accomplish these things.’’

Because of the legislatively-approved gift ban, Atwater and Sansom cannot take free food and drink from the governor, who employs a lobbyist. The lawmakers were advised to send checks of $35 to the Governor's Mansion Foundation.