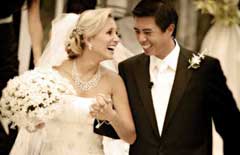 She married golfer Kris Lim on June 7, 2008 in front of 600 guests at the Fairmont Turnberry Isle Resort in Aventura, according to the show. The episode was billed this way: "A half-million dollar budget gets blown out of the water when Daddy's Princess gets every wedding wish she ever desired." In fact, the final price tag came to $1,000,500. (Book, who has got one of the longest client lists in Tallahassee, has reported earning twice that in just six months.)

Click here to see photos, including one with this caption: "The custom crystal-draped centerpieces at 3 different heights throughout the room -- $56K. Custom butter creme paillette linen overlays will be specially flown in from India -- $9K."