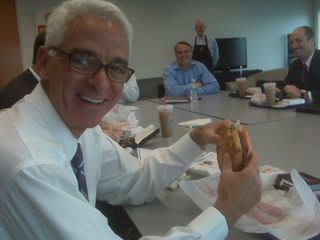 Charlie Crist limits himself to a light dinner each day. But the oh-so-polite governor didn't want to be rude to a corporate citizen like Burger King, which employs roughly 20,000 people in Florida.

So during a visit to the Miami headquarters, Crist took small nibbles of three products coming to a Burger King near you: the "Bourbon Whopper" (pictured left), "BK fire-grilled ribs" (pictured below) and funnel cake sticks.

"Oh my word, that is delicious. Get it away from me," after taking a bite of the hamburger with the familiar toppings of lettuce, tomato, onions and mayo and an added kick of bacon, pepperjack cheese and Bourbon sauce. Of the ribs he said, "Unbelievable...that is delicious. Superb." He declared the funnel cake sticks -- which he declined to dip in the icing to save himself a few calories -- "kind of light and flaky, like a beignet." He added, "Probably dangerous for my diet to have come here."

Actually it was his second  trip to Burger King this month. A visit on Sept. 2 had to be cut short because his plane was delayed. So he came back, spending yet another day in South Florida at a time when his schedule is chock full of fundraising events for his Senate campaign. He's collecting checks in Miami Beach tonight. Download Charlie Crist Invite US Senate "Isn't that convenient?'' Crist quipped.