Even more Sink-McCollum fingerpointing over Rothstein

So the Alex Sink for Governor campaign unearthed a photo of Republican opponent Bill McCollum smiling with accused Ponzi schemer Scott Rothstein (more here). Now McCollum's folks have dredged up their own photo of Sink and Rothstein. Here it is. Neither the Sink or McCollum photos have the energy of this one featuring Charlie Crist, in which he called Rothstein "amazing." Indeed. Allegedly bilking people out of $1b is quite feat. 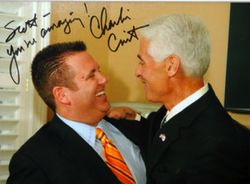