When will national Democratic party fess up to Rothstein money? 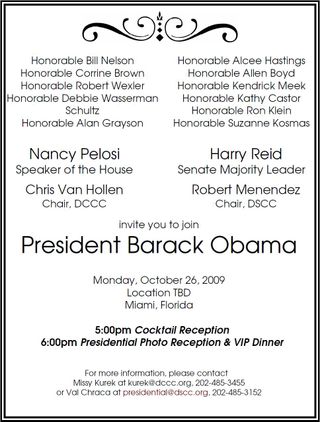 Just one day before Fort Lauderdale lawyer and alleged Ponzi schemer Scott Rothstein fled for Morocco as the feds were closing in, he was spotted at a Miami Beach fundraiser headlined by President Barack Obama.

Tickets to the Oct. 26 event at Fountainebleau Miami Beach hotel benefitting Democrats running for Congress and Senate started at $500. Donors who gave $10,000 got a brief meeting with the president; $15,200 got you a photo, too. Contributions of $100,000 earned you a seat at Obama's dinner table.

While donors from Gov. Charlie Crist to Chief Financial Officer Alex Sink to U.S. Rep. Adam Putnam to state Rep. Ellyn Bogdanoff have pledged to return donations linked to Rothstein, the national Democratic party has stayed mum. Repeated calls and e-mails to confirm Rothstein's attendance at the fundraiser and the amount of his donation have gone unreturned.

Time to fess up. As party officials know, any Rothstein money will eventually show up in reports posted to the Federal Elections Commission web site.

Any photos of Rothstein and Obama together floating around out there?