Check out the expense account for Steve Lippman, one of the attorneys at the now defunct Rothstein Rosenfeldt Adler law firm. A complaint filed against him in federal court today alleges that between 2006 and 2009 he was paid more than $930,000 for expenses from the law firm for things such as country club charges, household items, sport tickets.

Bankruptcy attorneys are now trying to recoup those expenses, plus bonuses and loans, paid to Lippman. His attorney Bruce Zimet said he did nothing wrong.

"Every cent he got he earned legitimately,'' Zimet said.

The complaint does not mention political donations -- Lippman and his wife gave more than $240,000 to candidates including Gov. Charlie Crist. Federal prosecutors have alleged that Scott Rothstein gave bonuses in exchange for employees making donations -- although they haven't named names. But Zimet said that Lippman gave on his own -- not in exchange for any bonuses or compensation from the law firm.

Lippman likely isn't the last person at the law firm who will be asked to fork over money.

This ad has been making the rounds: 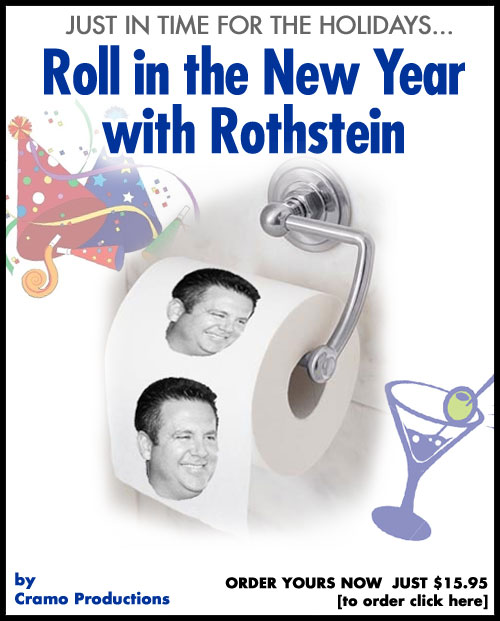 Attorney General Bill McCollum has ordered his staff to check the constitutionality of the requirement in the federal health care bill that individuals buy health insurance.

The provision is similar to that of a Massachusetts law enacted in 2006. It requires people to buy coverage or face a stiff penalty -- much like drivers have to buy basic car insurance. That law was championed by Mitt Romney, the GOP presidential aspirant who was then governor of the Bay State.

But McCollum has "grave concerns" about what he dubbed the "living tax."

"It would be levied on a person who does nothing, a person who simply wishes not to be forced to buy health insurance coverage. Upon initial review, this appears to be contrary to the freedoms we, as Americans, have enjoyed for the past 233 years," he said in a release.

I trust you and your family enjoyed the Christmas holiday.  Thank you for your email of December 21st below in which you opine on the state of your chairmanship.  I wonder if you would clarify one issue for me.  You mention in your email that what you "do not enjoy is the support of all of the Republican primary campaigns for the United States Senate."  And that you will not "let the efforts of one campaign" deter you from your "mission" as chairman.

Have I missed something?  While I have heard an array of Republican voices calling for your resignation, from current elected Republican Party officials throughout the state, to longstanding Republican fundraisers (including Charlie Crist contributors), to former Republican elected officials and legislative leaders, I have not heard or seen anything similar from the U.S. senate campaigns of Marco Rubio, Bob Smith or any other Republican U.S. senate candidate.  Also, while I have heard and read about efforts by you and RPOF contractors to debilitate the campaigns of Republican U.S. senate candidates, I know nothing about their supposed efforts to debilitate your chairmanship.  Again, if I have missed something, please let me know; particularly since you cite these campaigns in the context of "slander and libel by a group of people bent on the destruction of the Republican Party."

Posted by Marc Caputo at 5:49 PM in Republican Party of Florida | Permalink | Comments

"The campaign is up and running smoothly and has a very strong leadership team and candidate, so there is no need for my counsel and assistance," Hill wrote today in an e-mail to the Times. "I am focused on other 2010 commitments, particularly the Meg Whitman (gubernatorial) campaign in California and Terry Branstad's campaign for governor of Iowa."

Dockery responded to the announcement with a statement: "David Hill is a long-time family friend who provided wise counsel during last summer’s four-month Draft Dockery effort. Doc and I are eternally grateful for his help in building a strong and dynamic campaign team. A formal announcement of the team’s leaders and their roles will be made after the first of the year."

Wasserman Schultz, who said she talked with Reid about including the provisions, called it a "giant step" to "ensuring that all young women have the tools and resources they need to practice good breast health and detect breast cancer early."

The provision directs the Centers for Disease Control to develop a national education campaign to increase awareness of breast health, family history, and the threats posed by breast cancer in young women. Wasserman Schultz says it has the support of more than 40 advocacy organizations, including the American Cancer Society Cancer Action Network and Susan G. Komen for the Cure Advocacy Alliance.

A Jacksonville man's complaint against Miami Rep. David Rivera for allegedly breaking a House fundraising rule has been dismissed by Rules Chairman Bill Galvano. Galvano said the complainant didn't have enough personal knowledge or facts about the incident. More here on background.

Galvano also dismissed an unrelated complaint against a lobbyist engaged in the cut-throat world of bingo. Download Bingo

Feds probing ties between indicted banker and members of Congress

Just hours after federal agents charged banker Allen Stanford with fleecing investors of $7 billion, the disgraced financier received a message from one of Congress' most powerful members, Pete Sessions.

The message from the chair of the National Republican Congressional Committee represents one of the many ties between members of Congress and the indicted banker that have caught the attention of federal agents.

The Justice Department is investigating millions of dollars Stanford and his staff contributed to lawmakers over the past decade to determine if the banker received special favors from politicians while building his spectacular offshore bank in Antigua, The Miami Herald has learned.

Posted by Lesley Clark at 10:50 AM in Congress | Permalink | Comments

Brazil gets its new ambassador

GOP senators, including LeMieux, had held up Shannon's appointment for months because of concerns with State Department policies. But LeMieux said last week he'd lift his hold, citing State Department commitments on Cuba and Honduras.

Posted by Lesley Clark at 11:23 AM in Cuba | Permalink | Comments

Miami-Dade School Board member Renier Diaz de la Portilla is under investigation for allegedly skirting bidding rules to pay for a mailer that could help his brother in a political campaign to succeed their other sibling as state senator.

Renier Diaz de la Portilla said the mailer, approved by a School Board lawyer, was legitimate and that the investigation launched by the county's inspector general was ``politically motivated.'' It stemmed from a complaint made by Miguel Diaz de la Portilla's campaign opponent, Julio Robaina.

Robaina, a Republican like the three brothers and currently a state representative, says the mailer was akin to a taxpayer-funded campaign piece because it targeted reliable Republican voters in the senate district.

Total cost: $23,400, though Miami-Dade's school board has halted payments on the contract until the investigation is over. The state attorney's office has now launched a related criminal probe, according to WFOR-CBS4, a Miami Herald news partner, which broke the news of the probe this week.