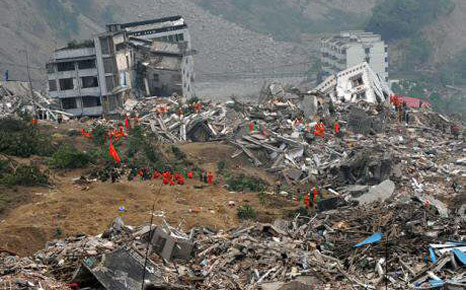 Gov. Charlie Crist is rearranging his schedule today to head to Miami-Dade and figure out just what the state can do in the aftermath of 7.0 earthquake that made one of the Western Hemisphere's poorest and saddest nations even poorer and sadder. Story here

In the short-term: get food and water to the disaster area of Port Au Prince.

"We have a huge warehouse of food and water, cots and blankets in Orlando," Crist said this morning. "I talked to (FEMA director) Craig Fugate this morning and (State disaster chief) Dave Halstead and we'll fly down to Miami along with Rep. Yolly Roberson. We're going to the EOC in Miami-Dade to make the announcement that we stand at the ready to provide assistance and humanitarian aid."

With some Miami-Dade congressional leaders calling for temporary protective immigration status for Haitian, Crist said he hasn't yet thought that out. "My first duty as governor is, first and foremost, to offer humanitarian aide. We have 56,000 MREs -- meals ready to eat -- to provide in addition to water and cots and blankets," Crist said.

But there's also a political dynamic. Crist, a U.S. Senate candidate, is locked in a tougher-than-expected Republican race against former House Speaker Marco Rubio of Miami. And inclusive immigration policies aren't much of a vote getter among the conservative base. But if any single event has the power to change Florida's political landscape, this quake is it. The state is bracing for a flux of immigrants from the island, Crist acknowledged.

"We need to be ready and we will be ready," Crist said.