« Did Crist eliminate reference to GOP from his web site? PolitiFact says 'Nope' | Main | The GOP credit card statements you've all been waiting for » 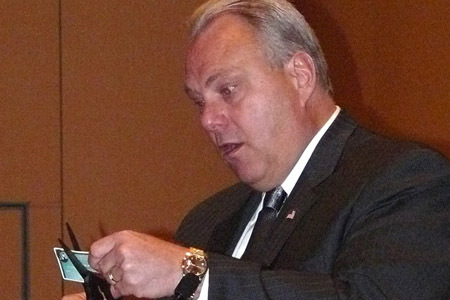 Reeling from a criminal probe into the Florida GOP's finances, Republican leaders finally got a peek Wednesday at the spending habits of the man at the center of the long-running scandal: Jim Greer.

The ousted party chairman charged nearly $500,000 to his American Express card to eat well and live well: spa treatments, flowers, flights, fine hotels and pricey restaurants. In a month ending in March 2008, he dropped $41,421.31 in Las Vegas, Washington and Beverly Hills, according to billing statements obtained Wednesday by the St. Petersburg Times and Miami Herald.

Greer's spending is just a sliver of the $7 million charged on party AmEx cards between late 2006 and 2009. The Times/Herald on Wednesday also obtained the statements of Senate President Jeff Atwater, who charged $44,116, and former party executive director Jim Rimes, who has charged the most to date: more than $2 million.

Board members of the scandal-rocked state GOP are scheduled to meet behind closed doors Friday, where they will likely discuss not only the ongoing IRS and federal criminal investigations but also whether to release the credit card statements of all party leaders and staffers. Board members this week received only Greer's statements.

Gov. Charlie Crist never had a credit card, but he's not free from the controversy. FBI agents have asked about the Crist campaign, said Republican fundraiser Al Hoffman.

"They had Jim Greer's travel expense records and wanted me to react to some of the issues surrounding that debacle,'' said Hoffman, a former ambassador who helped lead the ouster of Greer and was interviewed by agents last month. "Definitely they asked about the relationship between the Crist campaign and the party, relative to the co-mingling of funds. ... I believe they're after any federal election law violations, tax avoidance issues, and criminal fraud."

It was no secret Greer was aggressively promoting Crist's campaign, but it could be a violation of federal election law subject to civil penalties for the state party to pay for a federal candidate's expenses. Federal campaigns are barred from accepting the kinds of unlimited "soft money" donations and corporate donations that the Florida GOP is allowed to accept. Greer, who is suing the party over a severance agreement, denies wrongdoing.

Crist picked Greer to be party chairman and stood by him after months of blistering criticism from Republicans who said Greer mismanaged party finances. Crist finally called for a federal probe of the party amid the disclosure of the credit-card statements of his U.S. Senate opponent, Marco Rubio, the former House speaker.

"It's a criminal justice issue. As I said earlier, I've got great faith and confidence in the FBI and the U.S. Attorney's office. And I'm sure that justice will be done," Crist said Wednesday.

Rubio is among the Florida GOP leaders whose credit card spending is under review by the IRS, but like Crist, he has denied wrongdoing. On Wednesday, he sent a $2,417.80 check to the state party as reimbursement for six flights that he said were inadvertently double-billed to the party and to state taxpayers.

"After all the negative publicity regarding the way Charlie Crist's hand-picked chairman spent money at the state party, getting this information out in the open will be the best way to deal with it," Rubio said. "As far as my spending is concerned, it was for legitimate political purposes. When I made personal charges, I paid for them directly to American Express. I have not been contacted and don't know anything about any potential inquiries, but I welcome the chance to set the record straight once and for all."

The battle between Rubio and Crist has helped divide the party after a year of enduring scandals. Rubio's successor as speaker, Republican Ray Sansom, awaits trial on corruption charges for his handling of the state budget. A former fundraiser for both Rubio and Crist named Alan Mendelsohn was indicted in a separate corruption probe. And Crist's top fundraiser, Scott Rothstein, pleaded guilty to a massive Ponzi scheme in which he helped use ill-gotten gains to make campaign contributions.

Greer blames his problems on Rubio's supporters and said he did nothing wrong. His attorney, Damon Chase, said Greer's expenses were legitimate.

"He repaid what he thought was personal and everything he spent was authorized and ratified by the party," said Chase, whose client had been widely criticized for anemic fundraising. "He spent a lot of money because he raised a lot of money. The return on investment was a lot more substantial."

Greer's biggest month-long spending spree ran from February to March 2008 when he charged $41,421 in trips to Washington, Las Vegas and Beverly Hills.

In the nation's capital. Greer dropped $500 at J. Paul's restaurant, spent $50.76 at the White House visitors' gift shop, picked up the $808 plane ticket of former Crist staffer and current U.S. Sen. George LeMieux and checked out a block of rooms at the Intercontinental for $6,239.

In Vegas, he spent $545 at Caesars Rao's restaurant, paid Designer Tickets Inc. $660 for a theatrical production and chartered On Demand limousine service for $429.

There is no record of the state party receiving donations from Nevada around the times Greer was there, though one trip coincided with a Vegas fundraiser for the Crist Senate campaign.

Some of Greer's spending was close to home: $152.99 in dry cleaning charges at White Cleaners in his hometown of Oviedo in February 2008 and $924 in two days in March 2009 at the Publix grocery store around the corner — expenses Greer's lawyer says were for fundraisers. In Tallahassee, he paid a $101 bar tab at Finnegans Wake and $422 at Bernice at Betton spa — a charge Greer said might have been made by an underling with his card number. Some of the spending was small, from $44.70 for Vogue Cleaners dry-cleaning service in Tallahassee to $23.60 for a car wash at Super Suds.

"It's good to be the king," scoffed Pinellas state committeeman Tony DiMatteo, after reviewing Greer's statements. "When you're an average person who flies coach and takes a cab, you wonder what are some of these expenses about."

But DiMatteo suspects many expenses for Greer were likely charged to lower level staffers' credit cards, so at the board meeting Friday he intends to call for the release of everybody's statements.

"We need to get this credit card scandal behind us and get on to the business of winning elections,'' he said. "We thought when we elected John Thrasher the bleeding would stop. It's no longer hemorrhaging, but it's still bleeding."

"Look at the hotel rooms," he said. "There weren't any Holiday Inns or Red Roof Inns. Limo services? You can go to Hertz and rent a car for $29 a day.''

The most striking expense on former RPOF executive director Rimes' statements — which total more than $2 million from July 2007 to April 2009 — is tens of thousands of dollars for chartered planes and limos. The less luxurious expenses apply to the labor-intensive running of campaigns and voter turnout operations — hotels, rental cars, food, cell phones and office supplies for staff and volunteers deployed around the state. So-called "staff meals'' range from $27.99 at McDonalds in Tallahassee to $556 at Chez Pierre.

Rimes, a longtime Crist aide and strategist, also racked up six-figure charges to fly staff and elected officials — including Lt. Gov Jeff Kottkamp and his wife, Cynthia — to the Republican National Convention in 2008 and pay for their hotel rooms in Minneapolis.

Senate President Jeff Atwater's credit card statements show he was a penny pincher in comparison to other Republican colleagues. The Republican candidate for chief financial officer charged $44,116 in expenses between July 2007 and August 2009.

While most of Atwater's travel was either by car — charging the party thousands of dollars in gasoline — or commercial jets, he also frequently hired the private jet company DayJet in Boca Raton. The total bill for that service: $4,025.73.

Atwater's dining tabs ranged from McDonald's and Subway to $2,185 at Buca Di Beppo in Chicago.

Former House Speaker Allan Bense also had a card and, between December 2005 and December 2006, spent $67,435. Much of it was on airfare traveling from Panama City around the state. He made a $772 purchase at Border's in Tallahassee and $425 at Walt Disney World.

While at home, he spent $641 at the Panama City's Salt Water Grill, and two weeks later spent $2,487 at Georgia's Restaurant in Tallahassee.

Other statements that have leaked out in recent weeks include about $100,000 in charges by Rubio; more than $400,000 by Rubio's chief of staff and political adviser, Richard Corcoran; more than $1.2 million by Melanie Phister, a junior aide organizing fundraising events; nearly $200,000 by House Speaker-designate Dean Cannon; more than $173,000 by former Speaker Sansom; and about $2,400 by Senate President-designate Mike Haridopolos.