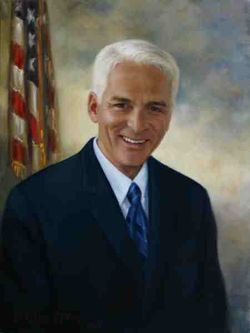 Nothing illustrates questionable spending at the Republican Party of Florida like the $7,500 for oil paintings of Gov. Charlie Crist and ousted Chairman Jim Greer.

The cost to the party would have been even higher if former executive director Delmar Johnson had his way. Johnson appears to have been the point man for the portraits and commissioned one for himself. But Johnson, who inked a hush-hush party fundraising contract for himself and Greer, was ultimately fired this January before the party could pick up the tab for his oil portrait and a few giclée prints.

The expense might have slipped by had not Havana artist D. Arthur McBride called the party early this year, looking for her money. By then, Johnson was gone. And there was no desire to use party funds for this.

"I thought I wasn't going to get paid," she said. Ultimately, Johnson paid her out of his own pocket.

McBride said it all started when she decided on her own to paint a portrait of Gov. Charlie Crist and hang it in her First Street studio. Johnson, a champion sycophant when it came to pleasing Greer and Crist, stopped by the studio last spring. He loved the painting.

"They wanted to give it as a gift to the governor," McBride said. She gladly sold the painting as Johnson eagerly commissioned another portrait, this time of Greer. She finished the portrait sometime in the summer. On October 8, 2009, the party paid her $7,500 for the paintings out of its federal account. Johnson then commissioned the painting of himself.

Like much of the big spending at the party (where $7 million in credit card purchases were rung up by Republicans with shop-and-dineritis in recent years) the oil painting costs didn't come to light until this year as party officials tried to figure out just where all the money went. Party officials are meeting Friday in Tallahassee to talk about criminal and tax probes involving the party, a forensic audit and Greer's credit-card expenses.

Expect the portraits to hang figuratively in the background of the talks. Something stands out about them. The party officials who rang up hundreds of thousands of dollars for meals, charter jets, limo services, etc., could and do make an argument that the wining and dining is a necessary fundraising investment to get donors to open their wallets.

But a portrait is tough to justify.

The Crist portrait hung in the party's headquarters for a time. We're not sure if it's still there. Greer was presented his portrait at a Christmas party.