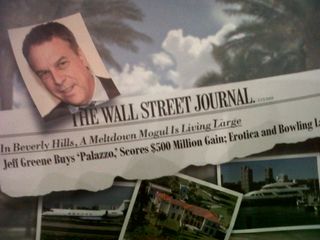 Don't think Democratic Senate candidate Kendrick Meek mentioned rival Jeff Greene by name at last night's state party dinner in Hollywood, but he sure does in this new mailer. It describes the real estate mogul this way: "A former California Republican, billionaire Jeff Greene made his money on Wall Street rooting against middle-class homeowners hoping their mortgages would collapse...It's hard to be the worst of Wall Street, but Jeff Greene found a way."

Meek is on a marathon swing through South Florida today, with stops including a Lauderdale Lakes church, the Sunrise Lakes retirement condominium, and a Miami union hall.