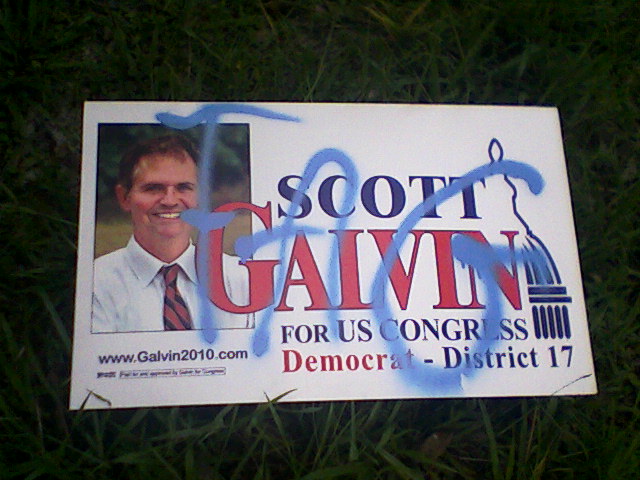 Over the past few days, supporters of North Miami city councilman Scott Galvin --one of nine Democrats vying to replace U.S. Rep. Kendrick Meek in Congress -- have taken down about half a dozen campaign yard signs after someone spray-painted the word "fag" on them, Galvin's campaign said Wednesday.

"I'm a little dumbfounded," Galvin said. "They didn't paint any other signs in the neighborhood, that we found."

The defaced signs were found in the area near Northeast 135th Street and 12th Avenue, he added.

Galvin, who is gay, came out in 2004, when he was already a councilman. He has been subsequently reelected to the city post and is now the only white and openly gay candidate seeking Meek's seat.

He has never had signs defaced like this in the past, Galvin said: "I've often said how proud I am of North Miami for being an enlightened town."

He added that he told North Miami police of the incident Tuesday.

(Photo courtesy of Derek Newton, a consultant for the Galvin campaign.)