Why you gotta love (or hate) Jeff Greene 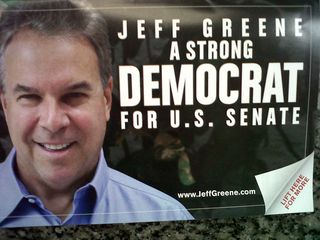 You got to admire the chutzpah of this guy. He spends his life registered as a Republican and independent until 2008, when becomes a Democrat. He's given to Republican candidates as recently as 2009. And then he challenges U.S. Rep. Kendrick Meek of Miami, who hails from the closest Florida has to a Democratic dynasty.

Who's the true Democrat in the U.S. Senate race? I am, says Greene, in a new mailing that features a picture of him and his wife at the Obama inauguration. He also makes Meek out to be a supporter of offshore oil drilling, even though he's not.