Abortion, church, and immigration on the GOP trail

Rick Scott made two brief addresses this morning at El Rey Jesus, the massive Hispanic church in Kendall where Bill McCollum ran into some bad publicity over his immigration flip floppery. More here on that.

“I think a lot of people were put off…. It was disrespectful what he did,” Scott said. “He talked to leaders here whether they’re Hispanic --  Pastor Guillermo Maldonado – or other leaders, like Jeb Bush, Ileana (Ros Lehtinen) or the Diaz Balart brothers. And he didn’t tell them his position. He didn’t tell them he was going to come out and do something that, he said, was stronger than the Arizona bill.”

But Sunday was a mixed blessing for for Scott.

The Christian Coalition of Florida and the pro-McCollum Florida Family Policy Council (remember the guys who called him a darling of the “radical homosexual lobby? See below) released its voter guide, which suggested that Scott was softer on abortion and gambling than McCollum, who said he opposes abortion in cases of rape and incest. Scott doesn’t.

Though Scott and McCollum both said they support legislation that “includes an ultrasound in the interest of a woman’s health, safety and disclosure of information prior to an abortion.” The guide has a footnote: “Note Mr. Scott was the CEO of Columbia/HCA Healthcare hospitals while they performed elective abortions.” More here on that.

It says that Scott (unlike the “opposed” McCollum) is “undecided’ on whether to expand gambling in Florida for the purpose of increasing state revenue.” But then it adds a footnote from Scott: “I would hope that we would not rely on gaming to fund our state government. I am a firm believer that these types of issues should be left up to the individual communities that would be immediately affected.”

As for a plan to “exempt existing adult businesses from adult zoning regulation changes.” The guide said Scott had “no response.” But again there was a footnote: “I support local community standards.”

** Here's a 2004 flyer sent out from John Stemberger, of the Florida Family Policy Council. He's now a McCollum supporter. Sure wasn't then. 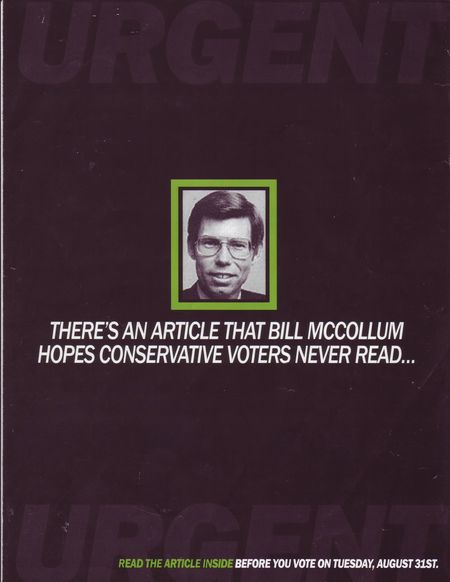 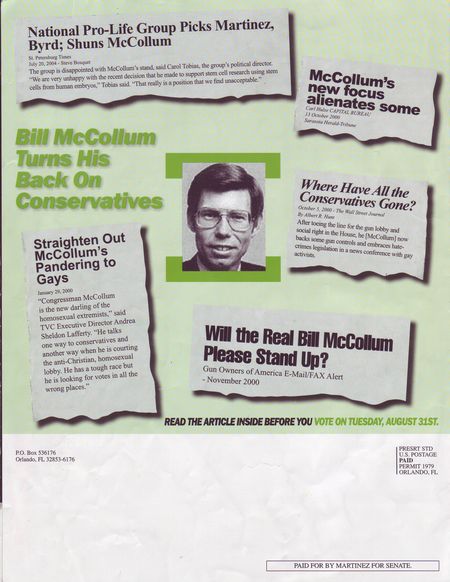