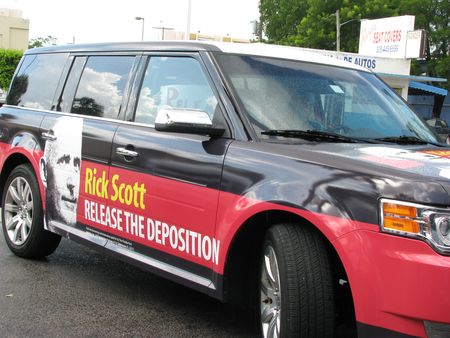 Bill McCollum's political committee, Florida First Initiative, which took in more than $583k in just two days, is scrambling to spend the $4.7m (and counting) that it has raised from nearly every heavy-hitting special interest in the Capitol.

So, wherever Rick Scott can be found, Florida First has dispatched an SUV emblazoned with a car wrap that says "Rick Scott: Release the Deposition." In the SUV, two twenty somethings, one dressed as a doctor the other as an old-fashioned black-and-white-striped jail bird. Both wave signs, accusing Scott of hiding a deposition he gave in a lawsuit involving Solantic, a chain of walk-in clinics he founded. Though they accuse Scott of secrecy, neither mole will give his name. One of them was likely hired by RPOF last year to protest Alex Sink (we'll try to find the video from the archives)

Later Friday, McCollum donor/trial lawyer Steve Andrews unearthed yet another deposition in yet another case (unrelated to Solantic) in 2000. At the time, Scott's former company, Columbia/HCA, was under FBI investigation. And it was also being sued in an unrelated, civil dispute with a Nevada company over a telecom contract. So Scott pled the 5th Amendment time and time again on advice of counsel. The only question he answered: His name. (When Scott doesn't want to answer questions, he won't. Just read this Fred Grimm column regarding another deposition in 1996)

As for the Solantic deposition, Scott won't release it. He says the deposition is private and that any talk of anything but jobs is a sideshow. Andrews has sued a Collier County court reporter to obtain that deposition and served Scott with a subpoena in the case. But that court reporter is fighting Andrews, who has postponed the deposition, which was supposed to occur today in the Florida Press Center in Tallahassee.

Scott says the whole matter is a political stunt.

"This is Bill McCollum, a desperate politician who knows he's going to lose," Scott said. "He can't talk about his record because he has no record. So he says, 'I'll get all my insider buddies and we'll beat up on Rick Scott.' "

Scott has a vehicle of his own: A traveling Salsa band on a flatbed truck that roamed the streets of Hialeah and Little Havana today. At the Renaissance Ballroom, yet another band played for hundreds of supporters. All told, he hit three events in Miami-Dade, one in Citrus, another in Pasco and a final one in Hillsborough, giving four radio interviews, three television interviews and two newspaper interviews along the way. So much for him not being available.

Meantime, Scott is using his personal millions to beat up McCollum on TV. His ad guys are flooding TV stations and basically saying: "We'll buy whatever you have left." At Brighthouse a few days ago in Tampa, a Scott buyer came in with a $105k check. Now he's upping his buy by about $700k more this week. So don't be surprised to see Scott for GOP governor ads on Comedy Channel, Animal Planet, Tampa Bay Rays games... In this last week, he'll have spent $5.8 million on TV. McCollum and his allies look on pace to spend $4 million. What will they do with the rest of the money they can't spend on ads? Maybe get these guys a new suit: 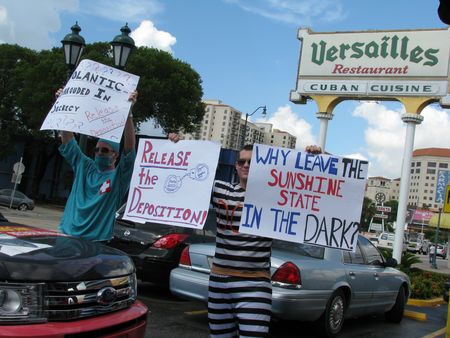 -- by John Frank and Marc Caputo