En route to Miami International Airport from a Democratic fundraiser at the Fontainebleau hotel, President Barack Obama made an unannounced stop at Jerry's Famous Deli on South Beach. 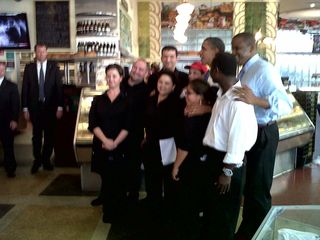 Here's a terrible picture of Obama and U.S. Rep. Kendrick Meek with the deli staff. Here's what happened, according to Politico's Carol E. Lee:

He was in the restaurant for about 10 minutes. There were few patrons inside, maybe a handful. But he was met with some very excited employees. He standing alongside U.S. Rep. Kendrick Meek and shook the hand of one of Jerry’s employees who was standing behind the counter when pool entered the restaurant.

“What do you think, Ben, you need a sandwich,” POTUS said to the AP’s Ben Feller. Feller declined. POTUS: “You sure they’re going to feed you on the plane?”

Obama wandered from the order counter to the cash register. “I’m promoting small business,” he said as he stood the ordering counter.

POTUS went to pay but there was no clerk there to take his money. POTUS and Meek were both in shirtsleeves and ties. The stood near the counter waiting for a cashier, chatting. Pool could not hear much. “This is like old school,” POTUS said of the place as he and Meek waited.

After a few moments a man squeezed past pool, which was jammed behind the counter with the employees, and went to the cash register to assist POTUS.

“Oh, we’ve got a cashier,” POTUS said. “You’ve gotta take my money,” he said, paying the man. “Here you go.’ He said the rest of it goes in the tip jar, and put some money in one that was set near the register.

POTUS and Meek then walked over toward the entrance of the deli, where some customers and staff stood. POTUS spoke to a woman who looked like she was about to cry. He hugged her. Then he posed for a photo with some employees.

They applauded him afterwards, and then he wandered over to the counter to the man whom he paid his bil."I understand you guys are open 24 hours,” POTUS could be heard saying as pool was escorted out.