Sink to pick Rod Smith as her running mate 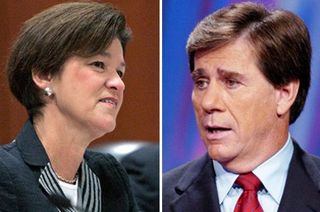 Chief Financial Officer Alex Sink will choose a former state attorney and Gainesville state senator Rod Smith to be her running mate for governor in an pre-primary announcement on Thursday in West Palm Beach.

Sources close to the Sink campaign said that she selected Smith after a two-month search of candidates that was narrowed to four finalists, including state Sen. Dan Gelber, a Miami Beach Democrat who is in a tight primary battle for attorney general, Fort Lauderdale Mayor Jack Seiler, and Sarasota state Rep. Keith Fitzgerald.

Smith, 60, a former Alachua County state attorney who lost the 2006 Democratic primary for governor, could not be reached for comment, but a major fundraiser who spoke recently with Smith said he considered this "his last chance for public service."

Smith, who served in the state Senate from 2000-2006, was state attorney for the Eighth Judicial District from 1992-2000, during which time he successfully prosescuted serial killer Danny Rolling.

Both Sink and her husband, Bill McBride, himself an unsuccessful candidate for governor, had been actively courting candidates since June, with the hopes of naming a running mate in time for the Democrat's Jefferson/Jackson Day dinner in July, a source said.

When that didn't happen, Sink was expected to wait until after the Aug. 24 primary to make her announcement, when the Democratic race for attorney general was over and she knew which Republican she would be up against for the general election, sources said.

But when Gelber urged Sink to choose Smith, Sink decided to move ahead with the announcement and chose West Palm Beach as the site because Smith spent part of his childhood there. He is a graduate of the University of Tulsa and the University of Florida law school. Smith is married to DeeDee Smith of Alachua and they have three grown children.

Asked about the speculation that he was being considered as Sink's running mate, Smith told the Herald/Times three weeks ago that he didn't consider himself to be a conventional candidate. Coming from the center of the state, he didn't bring a geographic advantage.

"I think that it’s not as simple as just geography, and it’s not just a matter of demographics,” Smith said at the time. “But each of those would be a valid consideration."

Smith, considered a conservative to moderate Democrat, said had he been nominated in 2006, he would have balanced his ticket by selecting someone from Southeast Florida who was philosophically more liberal than he is.

Smith said he thought former governor Jeb Bush's pick of Brogan was good because it signaled he wanted to focus on education reform. Smith also praised the team of Buddy MacKay and Lawton Chiles, noting that MacKay balanced out the ticket on several issues such as the environment.

"The first rule of politics is politics," he said, "but the next rule is ‘What do we do when we get elected.’”