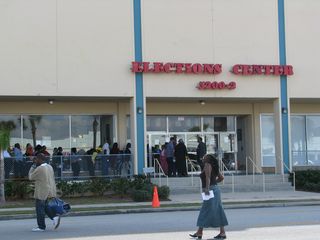 When the doors opened at the early voting site in Jacksonville's Elections Center at the Gateway Shopping Mall, the line of voters was 40 deep. An hour later, 80 people were waiting in line, many of them still in their church clothes, now sweaty from the heat.

It was part of the Democrat Party's coordinated campaign effort to bring out the African American vote on the final day of early voting. In Duval, the effort included phone calls and pulpit prayers.

Democrat Alex Sink took a whirlwind tour of four black churches Sunday morning, joined by Congresswoman Corrine Brown. Brown enticed voters with a chicken dinner at her campaign headquarters across the street from an early voting site in the heart of Jacksonville's North Side. "You've got to vote first,'' Brown said.

Sink spoke at each of the churches and acknowledged the bruising election fight. "My faith tells me not to pray for victory, because god will decide that, but to pray for strength,'' she told her audiences, then asked for their prayers. 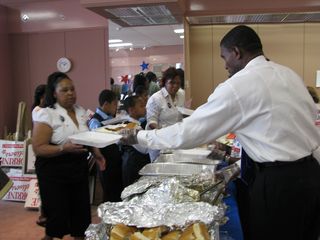