« Allen Boyd tells Pelosi: You're the face of our defeat | Main | Frederica Wilson backs Nancy Pelosi -- but not the House hat ban » 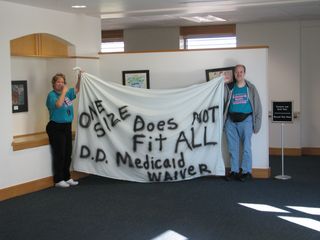 The Florida Senate launched its daylong hearing Wednesday in anticipation of its ambitious goal of reforming how Medicaid is delivered by steering patients into highly-regulated, private, managed care companies. Presenters include hospitals, HMOs, nurses, doctors, nursing homes, AARP officials and others.

Laura Mohesky, a case manager, spoke to the panel on behalf of her clients. "The consumers are concerned they won't be getting the same thing they are getting now,'' she said. "Managed care hasn't shown us how they'll advocate for them or who could advocate for them."

Sen. Don Gaetz, R-Fort Walton Beach, one of the chairmen of the panel, told her not to conclude that managed care will reduce care for the people she serves. "I hope nobody has pulled the fire alarm,'' he said.

Mohesky didn't miss a beat. "It doesn't make sense to me,'' she said, interrupting Gaetz. "I have a hard time thinking you're going to give managed care the same budget you have now and they aren't going to want to profit from that. There's no way we should be profiting from any of these individuals -- ever."