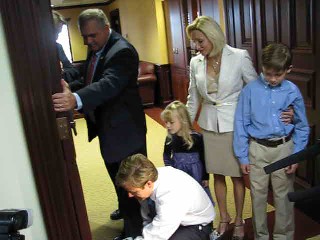 In a symbolic gesture designed to send the signal to the Florida Senate that its new president has an open door policy, incoming Senate President Mike Haridopolos unhinged the doors of his internal office Monday and declared "these doors are open."

Meanwhile, Haridopolos met with Gov.-elect Rick Scott on Saturday at the FSU football game in which they discussed Scott's interest in keeping in place Gov. Charlie Crist's veto of a bill that would have usurped some of the governor's authority over the Department of Management Services. (Photo: Senate Sergeant-at-Arms Donald Severance, Haridopolos, his wife Stephanie, their youngest daughter, Reagan, and son, Hayden.)

“The governor has expressed his clear desire to take a look at that. He thinks he can do a better job with it and we want to give it every consideration,” Haridopolos said. He added that he doesn't want to have any conflicts with the governor.

“This is a different kind of legislature,'' he said. "You’re going to see the governor and the legislature in concert. The governor-elect expressed concerns about our potential veto override. We’re giving every consideration.”

Haridopolos also promised that, unlike some of the bills poised for a veto override: "Every single bill is going to go through three committee hearings because it's an open, transparent process,'' he said. "A lot of things are symbolism, including our flag. I think it's important for people to know that we are receptive to new ideas."