Sink does doughnuts and phone calls with Democratic stalwarts 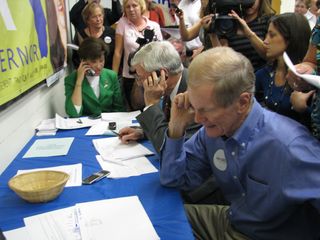 Facing a former doughnut shot entrepreneur, Alex Sink showed she can do doughnuts too. The Democratic candidate for governor began her day at Bennett’s Fresh Roast in Fort Myers, home of the amazing homemade doughnut,  where she was introduced by the city’s Republican Mayor Randy Henderson.

Traveling with former U.S. Sen. Bob Graham, current Sen. Bill Nelson, Democratic candidate for Attorney General Dan Gelber and her running mate, Rod Smith, they all then went to the Lee County campaign headquarters where they made live calls to voters.

“My friend, there’s probably not been a more important election in Florida,’’ Graham told a voter he had called.

The Lee County headquarters planned 12,000 phone calls to voters in that county today.

Nelson predicted that Sink will draw Southwest Florida Republicans in what he and others expect will be a key to her win: the crossover vote. “Alex has the wind at her back,’’ he said. “ That’s very important because it’s an upward movement on Election Day. I predict Alex wins by 4 to 5 points.”