Boozing at the Oviedo bowling center, insane ramblings of a syphilitic mind and other scribbles from the new Jim Greer evidence

Scribbles in my notebook after paging through most of the three discs of discovery in the state's prosecution of former Republican Party of Florida Chairman Jim Greer. (Intial story about the new evidence here.)

Documents show that the initial agreement stipulated that any payments from the party to Victory Strategies - the company Greer set up to allegedly skim contributions - were proper. The original agreement also included the promise of $1 million payment to Greer if the party defaulted on its severance package of $11,250 per month for 11 months

Also removed was a plan for party secretary Donna Solze to take over as interim chair, not Thrasher. Sometime between Dec. 30 and Jan. 3, the line for her signature was removed and added in her place were Cannon, Haridopolos and Thrasher. The so-called "Agreement, Mutual General Release And Confidentiality Agreement" was also changed to delete a requirement for an RPOF press release announcing the resignation to include quotes commending Greer on his service to the party.

Continue reading "Boozing at the Oviedo bowling center, insane ramblings of a syphilitic mind and other scribbles from the new Jim Greer evidence" »

Republican Attorney General-elect Pam Bondi today named former state Sen. Dave Aronberg, a Democrat from Green Acres, to a newly created post in her office focusing on prescription pill abuse. "He’s very familiar with this issue. He cares very deeply about this issue," Bondi, a Republican, said of Aronberg, who made a failed bid to become attorney general, losing the Democratic primary.The fact that he’s a Democrat, she said, doesn’t matter."What I want to do is bring people together on all sides who all care about the issue," she said.

Aronberg will be based in south Florida and earn $92,000 a year as special counsel for the pill mill initiative. Shortly after her election, Bondi signalled she planned to make pain clinics that excessively dole out prescription drugs — so-called pill mills — a focus of her office. She set up a transition team that included Aronberg to examine the problem. "We’re at a critical point in our state regarding the number of pill mills. The numbers are staggering. We’ve got to do something to stop it," Bondi said. "Just the other day I had someone say that a friend’s child overdosed. I said, ‘It was Oxycontin, wasn’t it?’ They said, ‘How did you know?’ It’s so widespread in our state. That’s something we don’t want to be known for."

Bondi’s move is likely to come as good news to people concerned that Gov.-elect Rick Scott opted to cut the Office of Drug Control from his administration. Bondi said she will likely push for legislation to tighten Florida’s rules regulating pain clinics.

Aronberg served in the Florida Senate from 2002 until 2010 where he was advocated for legislation to establish a prescription drug database and to more strictly regulate the ownership and operation of pain clinics.

"After getting to know Dave last year, I quickly learned that we share a strong commitment to shutting down pill mills. I have complete trust in Dave's ability to take on this very important fight with me," Bondi said in a prepared statement, "It is unacceptable that Florida has become the nation's pill mill capital and that multiple Floridians are dying every day from illegal prescription drug abuse. In cooperation with federal, state and local law enforcement, we will use all the powers and resources of the Attorney General's Office in a comprehensive effort to eradicate pill mills from our state."

Incoming Gov. Rick Scott has hired much of the staff in the governor's office, two agency heads this week and another today.

But taxpayers can't find out how much Scott's new administration is getting paid, because no one seems to know.

The transition team will say nothing on the record other than there are no public records regarding new salaries.

But the story coming from inside the transition team to explain this is a bit mixed. Some sources say details of the salaries are still being negotiated. (How bad is the economy when people are taking jobs without knowing their salary?) Others says the transition team doesn't want to release salary information because they're in negotiations with other potential hires.

Incoming Gov. Rick Scott will select Wansley Walters, head of the Miami-Dade County Juvenile Services Department, to take over as secretary of Florida Department of Juvenile Justice, according to a member of Scott's transition team. The official announcement could be made as early as today.

Walters will succeed Frank Peterman of St. Petersburg, who was order by Gov. Charlie Crist's office to pay back $26,000 in what Crist's chief inspector general determined to be questionable or excessive travel between Tallahassee and his home in St. Petersburg. Peterman, a former Democratic state lawmaker, was one of several state agency heads who asked to stay on in the new administration.

Florida's government-owned hospitals will be in the political cross hairs after Tuesday's inauguration of Rick Scott, once leader of the nation's largest for-profit hospital chain.

The governor-elect's transition team has recommended creation of a panel to study whether government-owned hospitals -- Miami-Dade's Jackson Health System and Broward's two hospital districts among them -- are necessary.

``This is going to be a very hot topic during the legislative session,'' said Barney Bishop of Associated Industries of Florida, lobbyists for the state's large businesses.

The new focus on public hospitals comes as a related crisis looms: Because the state has failed so far to deliver promised Medicaid reforms, Florida stands to lose $350 million in special funding from the federal government unless it can get an extension of a waiver. Read story here.

Incoming Gov. Rick Scott announced today that FOX News host Greta Van Susteren will be the keynote speaker at the "Salute to Women in Leadership Breakfast" on Monday.

Susteren, a friend of incoming Attorney General Pam Bondi, is the host of "On the Record with Greta Van Susteren" and previously was host of CNN’s prime-time news and analysis show, "The Point with Greta Van Susteren." She won the American Bar Association’s Presidential Award for Excellence in Journalism for her legal analysis for CNN during the 2000 presidential election.

Rep.-elect Frederica Wilson -- whose departure from the state Senate has set off a flurry of politicking -- is joining the ACLU in calling on President Barack Obama and Homeland Security Secretary Janet Napolitano to scrap plans to deport Haitian nationals with criminal records who have completed their sentences.

The group calls it wrong to deport Haitians while the country is still undergoing a cholera epidemic. Read the letter here.

"Current conditions in Haiti are simply too dangerous to allow for the safe return of Haitian nationals with final removal orders," said the ACLU’s Washington Legislative Office Director Laura Murphy. "If this administration resumes deportations to Haiti in mid-January, this administration will not only jeopardize the lives and safety of Haitian deportees, but will also violate international human rights and refugee laws."

Wilson -- who in January will assume the seat formerly held by Rep. Kendrick Meek -- noted her district has the largest Haitan population in the U.S.

"I am keenly aware of the devastation and the impact the present situation has on the constituents in my district and on their families in Haiti," Wilson said. "The trauma and heartbreak is tremendously catastrophic."

The ever-quotable Tom Slade, former chair of the Republican Party of Florida, is weighing in on the race for RPOF chair (a contest in which he doesn't get to vote). Here's a letter he's sending out to Republican Executive Committee members in support of Jefferson Committeeman Dave Bitner, a lobbyist and former legislator.

In Florida, the GOP has worked hard for our successes: all four cabinet seats and historic, veto-proof majorities in the state legislature.  The only thing missing is an RPOF Chairman to harness the grassroots energy we have, promote our conservative , and convert our resources into success up and down the ballot in 2012.

Posted by Marc Caputo at 12:11 PM in Republican Party of Florida | Permalink | Comments

Incoming Gov. Rick Scott has collected $2.8 million for his inaugural celebration, according to contribution reports posted Monday. Money-raisers expect to exceed $3 million by next week.

The contribution report continues to read like a who's-who of Tallahassee special interests.

Some of the nanes and companies added to the list include: Altria, formerly known as Philip Morris, this big tobacco company wants the state to make Dosal start paying into Florida's landmark tobacco settlement case; Dosal, the Opa-Locka based cigarette maker that wants to avoid the surcharge; the St. Joe Company; Tampa Bay Downs; and Las Vegas Sands. 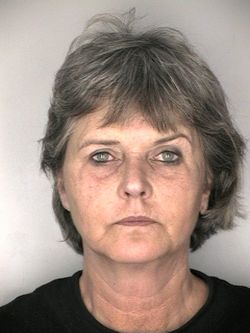 First she had to contend with charges she steered party money to her catering business. Then she had fellow Republicans from Hillsborough County say she's not fit for office. And now, county party chair Deborah Cox-Roush is explaining the circumstances behind a 2004 drunken-driving arrest. (Background is here)

Whether this will have an effect on her bid to become Republican Party of Florida chair is anyone's guess. But someone/people out there sure hope it does. Last night, the web page over the arrest started circulating around via email, and now it's hitting the Republican blogosphere.

Posted by Marc Caputo at 1:47 PM in Republican Party of Florida | Permalink | Comments