Gov. Rick Scott has decided to roll out his budget in the rural town of Eustis next Monday after reaching out to an umbrella of Tea Party groups. A Scott spokesman confirmed that Scott would roll it out in Eustis, but wouldn't say if he'd travel to Tallahassee to chat about his budget (like the other governors before him) with the people who would cover it: The Florida Press Corps.

From what we hear, Scott asked the tea-party folks to set up the event. He'll have a closed lunch with Tea Party supporters and then an open press event.

Bill Nelson steps out beyond the administration on Egypt: Mubarak will "have to go"

The White House isn't saying it, but Florida senator Bill Nelson suggests that Egyptian President Hosni Mubarak should step down.

Nelson, who sits on the intelligence committee, blogs: "Mubarak’s naming of the head of the country’s intelligence service as his vice president is a step in the right direction, and will satisfy some. But he cannot afford to clamp down again, as he initially tried to do by deploying his security forces and shutting down access to the Internet.

"Instead, Mr. Mubarak will have to go – but not without an exit strategy that prevents the government from falling and leaving the door open for extremists.

So far, the U.S. administration has exercised a great deal of caution. If President Obama pushes for Mubarak’s departure, the Egyptian government might fall into the hands of the Muslim Brotherhood.  We might then see a repeat of what happened in Iran after it fell into the hands of Islamic fundamentalists following the overthrow of the Shah of Iran in 1979.

"That’s why you see the delicate choice of words by our President and Secretary of State as they seek to maintain a balanced response to the crisis in Egypt. On Sunday, for instance, Hillary Rodham Clinton appeared on CNN and stressed that "we're not advocating any specific outcome.”

"Still, I believe there is a short-term solution that could help calm some of the civil unrest in Egypt: guarantee the people the right to vote in free and fair elections."

Gov. Rick Scott is in The Villages today, making a "major budget announcement," according to his press shop: A plan to save $1 billion over two years by eliminating regulations, duplication of government services and inefficiencies.

None of the details are spelled out in the 246 words of press release, which note that the Department of Community Affairs will ceded regulatory powers to other agencies (unnamed). The Department of Health will cede regulation of "drugs, devices and cosmetics" to the Department of Business and Professional Regulations, which in turn will give up alcohol-tax collections to the state's tax-collection agency, the Department of Revenue.

How this all adds up to $500 million a year in savings is yet to be seen. Scott unveils his budget Feb. 7.

Meantime, Scott has one believer: Sen. Mike Bennett, R-Bradenton, who said the real savings can be found in ensuring that DCA, the Department of Environmental Protection and the state's water-management districts "streamline" the permitting process.

Communicators, money-managers among this week's Movers and Shakers

DOE spokeswoman moves to House
Erin Rock has left her job as the Department of Education's communications director for the Florida House. Her last day at DOE was Jan. 27. Rock is the new staff director of the House's Office of Public Information.

Jeff Atwater appoints staffers at Financial Services
Christina Smith, a Florida State University accounting grad, received a promotion. She moves from assistant director of Division of Accounting and Auditing to director. Terry Kester, former chief information officer at the Department of Business and Professional Regulation, retains the title but moves to Atwater's agency. Kester had worked for the Republican Party of Florida from November 2003 to January 2007 as director of party development. And former Senate Majority Office staff director Allison Carter is the Department of Financial Service's new director of program management. Carter is expected to assess programs and find improvements.

Jennifer Green, owner of Liberty Partners of Tallahassee, LLC, was named chairwoman of the board of the Florida Association of Professional Lobbyists. Her term is up January 2013.

News Service of Florida reports were used in this week's round-up. Don't forget to send your personnel news to Times/Herald reporter Katie Sanders at ksanders@sptimes.com.

According to the press release, the book "will question what kind of country we will leave our children and if, in the words of President Obama in his State of the Union address, '…all of us-as citizens and as parents-are willing to do what's necessary to give every child a chance to succeed.' "

The book, written with Julie Fenster, a New York Times bestselling author, and Kimberly Gutzler, a children's advocate, "will cover a wide swath of contemporary topics including education, health and safety, the environment, national security and innovation and technology, and will lay out an urgent challenge to our nation so we can secure our children's future, now and for generations to come. "

Republicans rejoice as 'ObmaCare' tossed out by Florida court

The GOP is whooping it up now that Federal Judge Roger Vinson of the Northern District of Florida has become the second judge to declare President Obama's healthcare law unconstitutional. Vinson said that congress overstepped its bounds in passing the so-called 'Individual mandate" requiring people to buy health insurance.

The news barely hit the internet before Florida Senate President Mike Haridopolos, Gov. Rick Scott and a host of other Republican lawmakers hailed the defeat of the healthcare law.

The administration will likely appeal. But the U.S. Supreme Court, tilted in favor of conservatives, will likely uphold Vinson's ruling as well as a similar order made by Henry Hudson in Virginia.

Vinson's ruling points out a true oddity in the healthcare law: the absence of a severability clause, which would allow the law to stand even if portions of it are struck out. Without the clause, Vinson's ruling against the individual mandate undoes the entire law.

"Because the individual mandate is unconstitutional and not severable, the entire Act must be declared void," Vinson wrote. "This has been a difficult decision to reach, and I am aware that it will have indeterminable implications."

The Florida Republican got a rockstar reception at the forum for conservatives in 2010, but Marco Rubio will be a no-show this time around, electing -- his office says -- to focus on Florida.

The convention opens Feb 10 in DC. Spokesman Alex Burgos said Rubio will focus on his Senate duties that week, "and then cap off the weekend" by addressing the Pinellas County Lincoln Day Dinner on Feb. 12.

"His focus is on Florida and his schedule that week will reflect it," Burgos said.

No hard feelings: His picture and that of Allen West are on the CPAC banner. West, the site says, is a confirmed speaker.

Scott and legislators aim to start charging workers for retirement, details this week

Teachers, police and even legislators may start seeing -- for the first time in 35 years -- a chunk of their paycheck going into their retirement accounts if Gov. Rick Scott and legislators get their way.

The money could be used to offset the state's nearly $5 billion budget gap, fulfill Gov. Rick Scott's promise to cut $1.4 billion in property taxes or be rolled back into the retirement system to shore it up before the state's aging workforce retires.

But for the 572,000 state and local employees and 319,000 retired members in the Florida Retirement System, one thing is certain: ``Reform is coming.'' More here.

The Democratic Congressional Campaign Committee is taking aim at David Rivera with a radio ad that takes note of the investigation into his finances.

"Did you know Congressman David Rivera is under criminal investigation for receiving secret payments from his mother’s company?" asks the ad that starts today during drive time. "Tell Rivera to come clean so he can finally get to work for us."

The DCCC says the ad is part of part of a flurry of web ads, automated phone calls, live phone calls, and e-mails in several targeted districts.

The Washington Post notes the DCCC is targeting 19 GOP incumbents, including Rivera and Allen West -- mostly members who represent districts that President Obama won in 2008.

Posted by Lesley Clark at 7:04 AM in David Rivera | Permalink | Comments 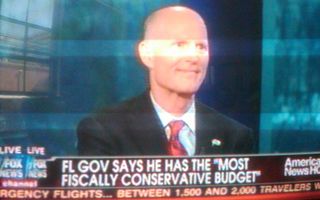 1.) In former Gov. Charlie Crist's first year in office, he took aim at his predecessor's record for budget vetoes.

Gov. Rick Scott has set his sights on the entire country.

In a FOX News interview today, Scott claimed he would have "the most fiscally conservative budget" when it is released Feb. 7.

"We're going to make all the tough decisions we should have been making across the country over the last, you know, so many years, which we haven't been doing." Scott said.

Later in the interview, he added: "I'm competing with 49 other governors and 49 other states."