Three days after Rick Scott was sworn in as governor he set about slowing down the process by which the federal government would approve of two highly popular state constitutional amendments, 5 and 6, concerning the way lawmakers draw legislative and congressional districts.

Scott's spokesman suggested to The Miami Herald, St. Petersburg Times and the Palm Beach Post that the governor wanted more information. `Census data has not been transmitted to the state yet..."

Well, as of today, some of that data is now in anyway.

The federal government sent Scott and other state leaders a letter today informing Florida that the "2010 Census Block Assignment Files" are now available. (text of letter below)** All the data has yet to be provided. But still, it's now coming in.

Fresh off three nights in Washington D.C., Gov. Rick Scott will head back north on Tuesday to round up 120 frozen northerners and bring them back to the Sunshine State. The two-day, four-city "Share a Little Sunshine Tour" is part of an an advertising campaign from VISIT FLORIDA that will end in Chicago, where 120 people will board a charter plane for a four-day Orlando vacation underwritten by Southwest Airlines, Walt Disney World and "dozens" of other VISIT FLORIDA partners. Neither Scott's press office nor VISIT FLORIDA said how much the trip would cost. Before Chicago, Scott will visit Washington D.C., Philadelphia and New York City.

Florida's pension fund is "better funded, incurs lower investment fees and...investment returns are average" compared to other states, according to a new report from the Legislature's policy assessment arm, OPPAGA.

The results conflict with the suggestion by Gov. Rick Scott that the Florida Retirement System is "underfunded."  In fact, the report says, the plan is 87.9 percent funded as of June 30, 2010 -- with a 13.1 percent unfunded liability. That was 10th highest in the nation in 2008-09, according to the report.

"The Pension Plan's funding ratio (i.e., the ratio of the actuarial value of the plan’s assets to the actuarial value of benefits owed to members and their beneficiaries) was 87.9%," the report said. "This means that at this time, the plan does not have sufficient assets needed to pay current and future expected benefits for participants and their beneficiaries. Actuarially, the plan has a shortfall of $16.7 billion. However, experts generally consider public pension plans with funding ratios at or above 80% to be fiscally sound."

The report notes that under actuarial rules, the state has 30 years to make up the shortfall through investment earnings. In his campaign for governor, Scott ran ads claiming that the fund had lost $24 billion. At the time he ran the ads, the fund had recovered all but $6 billion as a result of the Wall Street collapse, and has since restored almost all of its 2007 value, which the governor used as a benchmark.

Shuffles in the Speaker's office

Two departures in House Speaker Dean Cannon's office have set off a wave of reassignments and new hires. It started in January when Todd Reid, once Cannon's deputy chief of staff, took a new job as Sen. Marco Rubio's state director. Cannon promoted Kirk Pepper, formerly his director of external affairs, to fill Reid's spot. He also picked Ben Stuart, an attorney in the House economic affairs committee, to move to the Speaker's office as a process coordinator.

Longtime House staffer Melanie Phister left to work for John Johnson, a Tampa lobbyist, to be closer to family. Cannon special assistant Hannah Causseaux will take Phister's old position in the Office of Public Information as a program manager tasked with handling records and appointments. Filling her shoes as Cannon's scheduler is Carlecia Collins, formerly an RPOF staffer.

Jim DeBeaugrine joined SCG Governmental Affairs as a senior associate today after being replaced as director of the Agency for Persons with Disabilities. He will be in charge of the firm's expansion into criminal justice and health care fields. Gov. Rick Scott replaced DeBeaugrine, who had been APD's executive director more than two years, with Carl Littlefield, who resigned last week ahead of a Senate committee planning to question him about sexual abuse allegations at a Hillsborough County group home he oversaw.

The Fiorentino Group has added Allison DeFoor and Colleen Castille to its government relations and biz development firm in Tallahassee. DeFoor is former vice chairman of the Republican Party of Florida, Monroe County sheriff and circuit court judge, and Jeb Bush's Everglades czar, as well the 1990 Republican nominee for lt. governor. Castille is the former secretary of Department of Environmental Protection and Department of Community Affairs under Bush. They will be principals at the firm.

Did your news miss the weekly round-up? Don't forget to send personnel announcements to ksanders@sptimes.com.

Let's Get to Work -- and laugh with Rick, Mike, Dean et al at the Press Corps Skits 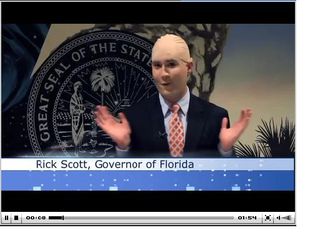 It's time for the 56th (Sometimes) Annual Florida Press Corps skits. This year's event will be Tuesday, March 15, at The Moon in Tallahassee.

Tickets are $35 per person this year, including dinner. All proceeds go to the Barbara Frye Scholarship Fund for journalism students. Get there early -- doors open at 6:30 p.m. The show starts at 7:30 p.m.

Check out our web site for tickets, and our two-minute video promo featuring (sort of) Gov. Rick Scott, and more information on the show.

U.S. Rep. Kathy Castor invoked businessman Warren Buffeett in her latest attempt to convince Gov. Rick Scott to allow passenger high speed rail to be built in Florida. Castor's letter quotes a memo Buffett wrote to shareholders of Berkshire Hathaway, in which he talks about moving freight by rail, noting that it's "three times more fuel-efficient than trucking."  Castor writes that "Buffett's championing of rail investments provides an important lesson for Florida."

The only problem with using the Buffett argument is that he doesn't seem to talk about passenger rail, only rail for freight. And Scott has frequently said he supports investment in rail as a way to more efficiently move freight to and from Florida's ports. He just doesn't seem to want to move people by rail.

Senate President Mike Haridopolos is last to appear for the 7:15 a.m. meeting, the only one who brought coffee, his blond hair still wet from a rinse in his office shower.

He claims a black leather chair at the head of a glass-topped table and moves right into the hour’s focus.

Who’s ready to talk about Lyndon Johnson’s turbulent years in the U.S. Senate?

The most powerful member in the Florida Senate, Haridopolos, 40, isn’t meeting with lobbyists, advisers, colleagues or reporters.

The students are spending their spring semester in Tallahassee, interning across town and attending his class. The self-proclaimed academic oversees a one-hour undergraduate seminar, IDS 4930: Florida Politics.

President Obama makes his case for high speed rail before the nation's governors: We can't afford not to

Meeting with the nation's governors today at the White House, President Barack Obama noted that his plans for high speed rail have "garnered controversy" in some states (see Florida: Rick Scott) which he attributed in some cases to "partisan politics." (He didn't name any names.)

But he argued that spending on infrastructure projects "hasn’t traditionally been a partisan issue.  Lincoln laid the rails during the course of a civil war. Eisenhower built the Interstate Highway System.  Both parties have always believed that America should have the best of everything. We don’t have third-rate airports and third-rate bridges and third-rate highways."

He said that new businesses are going to want the "fastest, most reliable way to move goods," whether its Chicago or Shanghai. And he wants them to stay in the United States.

The state's largest private landholder, St. Joe Co. has let go some of its top honchos at the urging of its largest shareholder, the Fairholme Fund (FAIRX), a series of Fairholme Funds, Inc.

"Recognizing the desire of St. Joe shareholders for the Company to pursue a different course, Michael L. Ainslie, John S. Lord and Walter L. Revell have also agreed to resign from the St. Joe Board of Directors later this week," a press release, dated today, said.

The 44th governor doesn't even merit higher play in a press release titled "The St. Joe Company Announces New Board of Directors." Here's his bio:

Posted by Marc Caputo at 11:07 AM in Charlie Crist | Permalink | Comments

If past is prologue, it's a sure thing that former state Rep. Aaron Bean of Fernandina Beach will be the next Florida Senator from Northeast Florida (replacing term-limited Steve Wise).

Here's why: The entire Republican Senate leadership is behind him, from Senate President Mike Haridopolos to his two likely successors. So it'll be easy to raise the roughly $4 million needed to win a state Senate seat in Florida. And, as Haridopolos showed with Sen. John Thrasher's race more than a year ago, he can raise far more if need be.

The Senate R's are holding a Bean fundraiser Tuesday at the governor's club. The hosts:

Posted by Marc Caputo at 10:20 AM in Mike Haridopolos | Permalink | Comments