Today's Associated Press article on the "unusual" deal that Senate President Mike Haridopolos got to publish a book describes it as thin on details and, in one part, wrong on facts when it comes to the name of Terri Schiavo, the comatose women whose plight was at the center of a nationally watched euthanasia case. Haridopolos misspelled her name.

By itself, that's no biggie. But the Florida Democratic Party played it up in an email that described the AP story as a must-read.

The story also notes the multiple errors that Haridopolos committed on his financial disclosure forms from 2004 to 2008.

Expect Haridopolos' mistakes and attention to detail to become a theme of the Democrats and incumbent U.S. Sen. Bill Nelson, whom the Republican state senator seeks to unseat

Haridopolos has described those errors as "embarrassing." What's he say of the Schiavo error? We'll have to find out later. He didn't return AP calls for comment.

Posted by Marc Caputo at 9:33 AM in Mike Haridopolos | Permalink | Comments

Back in 1974, employees contributed 4 percent of their salaries to their retirement fund while special risk members (police, firefighters, etc.) contributed 8 percent. But if those employees left the state workforce, they were entitled to have their contribution return to them in the form of a refund -- costing the state that year a whopping $30 million and setting up an unfunded liability. "The primary purpose in changing FRS to a non-contributory plan is to help eliminate the unfunded liability documented in past actuarial studies of state retirement systems," the newsletter states.

The end result of the change was to increase the state's contribution from 4 to 9 percent for regular class members -- where it remains today -- and from 8 to 13 percent for special risk members.

Today, Gov. Rick Scott wants state and local government to withdraw 5 percent of its contributions and have employees make up the difference. He is doing it to save the state money again -- only it's the reverse of 1974, with the money flowing into the retirement system coming from employees, not employers. The governor gets a $1.3 billion savings to the state by withholding 5 percent of the state's contribution to the FRS or, in the case of local governments, from local government revenue sharing plans. It's not clear whether employees could withdraw that money if they leave the FRS, under Scott's plan, as they did in the past or not.

So far, the Florida Senate is considering asking employees to shift money from employee paychecks to their retirement accounts at rates of about 2 percent of their salaries, while the House has yet to propose a plan.

Posted by Mary Ellen Klas at 12:15 AM | Permalink | Comments 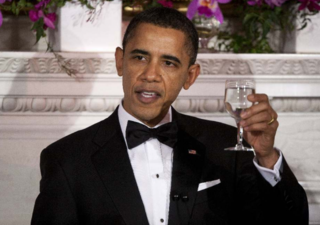 Gov. Rick Scott attended a black-tie dinner with other governors at the White House Sunday, where President Obama acknowledged differences in perspective but urged common ground.

"There’s extraordinary diversity among our states, and that’s a great strength," Obama said. "That’s why our federal system is the laboratory for democracy, because in each of your states you guys are trying all kinds of things. And oftentimes your best ideas end up percolating up and becoming models and templates for the country. But we’re also one nation and our goal has to be to find ways to find common ground and to work together, and I’m confident that we can do that moving forward."

Scott is no fan of Obama's policies, and has a tendency to prefix everything out of Washington as Obama-something (Obamacare, Obamarail, etc.) But he and other critics put that aside for the fancy affair. Obama toasted the group and joked, "I know some of you may be confused and think this is the Oscars. There are some similarities. First of all, everybody looks spectacular. And the second is this: If I speak too long, the music will start playing."

The governors are in town for the National Governors Association meeting and plan to return to the White House on Monday for meetings.

Posted by Mary Ellen Klas at 12:00 AM in Rick Scott | Permalink | Comments

Florida Gov. Rick Scott appeared with Connecticut Gov. Dannel Malloy today on CNN's State of the Union with Candy Crowley, talking about budget cuts, tax cuts and more. Here's an exchange, courtesy of CNN, on federal high-speed rail money that Scott has turned down for Florida:

CROWLEY: And, Governor Scott, let me just ask you, you have turned down $2.4 billion from the federal government to build high-speed rail between Orlando and Tampa. You have been given another week to think about it. Is there any chance in you know where that you would accept that money even if it went to local governments rather than the state?
SCOTT: What I have said all along is our taxpayers aren't going to take the risk of the cost overrun in building it. It could be $3 billion, the operating costs. We already have a train that goes from Palm Beach to Miami. Only one-sixth of the cost of operation is covered by the fares. On top of that...
CROWLEY: No way no how?
SCOTT: Pardon?
CROWLEY: No way no how you are going to take that money.
SCOTT: I haven't seen how they can do it.
MALLOY: But I'll take some -- I'll take some of that money...
CROWLEY: You'll take some of his...
MALLOY: ... and we'll spend it on Metro North and New Haven to Hartford.
CROWLEY: But I guess that's up to you guys.
SCOTT: I want the money for our ports. I mean, look at -- we have got the Panama Canal expansion, we've got the expansion of the economies to Central and South America, put that money into the Florida ports. That's where we want that money spent.

The details of Nubia Barahona’s death are grisly: Soaked in toxic chemicals, decomposed and stuffed in a garbage bag, she was found rotting on the shoulder of the interstate on Valentines Day. Authorities believe she had been stashed in a septic tank for weeks before her adoptive father dug up her corpse.

Statistically, however, Nubia’s story is rather common: She is one of hundreds of Florida children who died of abuse or neglect during the last decade after child welfare authorities had performed at least one investigation into their welfare. Florida not only leads the United States in the number of such deaths, it dominates the nation.

In the wake of a controversial decision by child welfare administrators to halve the number of children taken into state care — while, at the same time, reducing the number of children receiving protective services with their birth families — the number of deceased children with a child protection investigative history almost doubled, from 35 in 2001 to 69 in 2009. No statistics are available for 2010. Read more here.

Posted by Mary Ellen Klas at 10:42 AM | Permalink | Comments

House Speaker Dean Cannon, a lawyer from Winter Park, and Senate President Mike Haridopolos, a Merritt Island college professor who is running for the U.S. Senate, are poised to dominate the debate over the state’s budget and job crisis.

Unlike previous presiding officers, Cannon and Haridopolos consolidated their power on the strength of a veto-proof majority delivered by the Republican landslide in November. They strengthened that clout by steering millions of dollars in campaign cash to the political campaigns of newcomers who now owe their elections in large part to them.

Each has assigned a pecking order status to members – giving their favorites the most coveted office space, the most sought-after committee assignments, and even the most convenient parking spots. And, working with a small circle of advisors, each can determine which of the Gov. Rick Scott’s proposals stay in the budget, and which get killed.

Read more here for on the first in the Capital Clout series by the Miami Herald and St. Petersburg Times.

Marco Rubio to GOP: Do more than win elections

U.S. Sen. Marco Rubio, who has been keeping a decidedly low profile in Washington, urged the Miami-Dade Republican Party Saturday night to look beyond winning elections. The purpose of the GOP, he said, should not be to "simply want to be a political movement that spends money to win elections."

"We have to be willing to be on the right side of the issues, even if those issues may not always be the winning side," Rubio said.

Rubio mostly kept to his stump speech, warning about the dangers of the ballooning federal debt and referring to one of his favorite themes, "American exceptionalism."

"When I give this speech in Miami, I think it resonates more than in other places," Rubio told the captive audience largely of immigrants and the children of immigrants.

Posted by Patricia Mazzei at 9:36 AM in Marco Rubio, Miami-Dade Politics | Permalink | Comments

The crowd was pleased but not rowdy at the Miami-Dade Republican Party's annual Lincoln Day fundraiser Saturday night, an event where the grassroots celebrated their sweeping victory in November and geared up for the long, 2012 election season to come.

The dinner was a homecoming of sorts for U.S. Sen. Marco Rubio, the keynote speaker who received a rock star's welcome, despite his concerted effort to keep a low-profile, nose-to-the-grindstone approach to his work in Washington. State Rep. Jeanette Nuñez introduced Rubio as "the reason we’re all here — I don’t think anyone’s fooling themselves — Marco Rubio!"

It also marked a change of guard at the Miami-Dade GOP, now under the helm of state Rep. Erik Fresen after two wildly successful years being headed by U.S. David Rivera, who is under investigation over his personal amd campaign finances.

Rivera, too, received a warm welcome from the home crowd. But the real star of the night -- no surprise here -- was former President Ronald Reagan. A video tribute to Reagan played during dinner and received spontaneous applause at, "Mr. Gorbachev, take down this wall!"

And if anyone wondered who the establishment plans to support in the field of Republicans running for Miami-Dade County mayor: Hialeah Mayor Julio Robaina was the one who got a speaking part in the program.

He's already been on the cover of the New York Times magazine and mentioned as a potential vice presidential candidate. But now Marco Rubio may have reached the zenith: the game show Jeopardy!

"Who is Rubio?" was the answer to a $2,000 question in the midterms category. "Elected senator from Florida," host Alex Trebek intones, "This son of Cuban exiles has been called a rising conservative political star."

"Who is Rubio?" the contestant quickly replied. "Mar-co Ruuubio, right you are," Trebek said, attempting a Spanish accent.

The Miami Democrat known for a penchant for wearing colorful hats is one of six new members of Congress to be profiled in Sunday's Washington Post magazine. Her Broward neighbor, Rep. Allen West, is also profiled -- though he didn't make the cover. 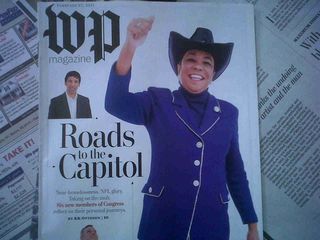