Scott on FOX: Rail project is a 'federal boondoggle' 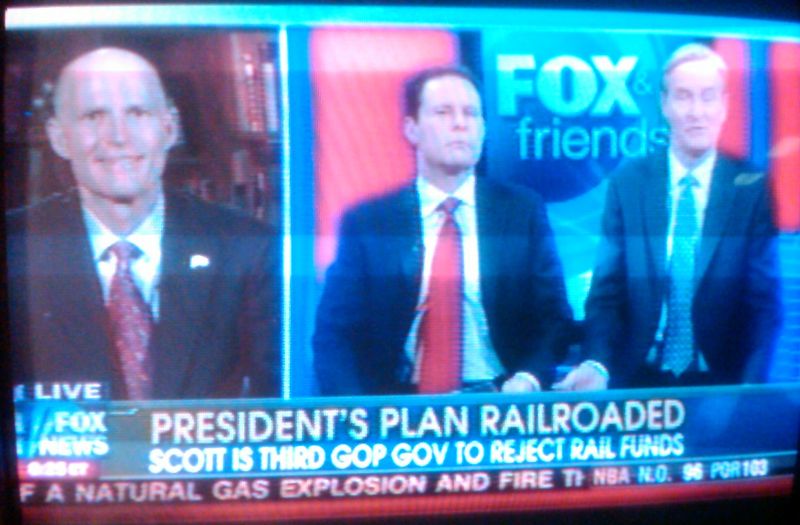 The comparison seemed to please Scott, who has created somewhat of a competition between himself and the rest of nation's govenors. The only governor who Scott mentions more than Christie is Texas Gov. Rick Perry.

One difference between Florida's rail project and New Jersey's tunnel is that Christie was frustrated the federal government woudn't increase its share of money for the project. Many believed Florida's project could be paid for without any state money, but Scott had already decided that building rail here would be a "federal boondoggle."

FOX showed Scott footage of U.S. Sen. Bill Nelson, D-Fla., saying he would try to work around Scott to get the money for the state. Scott's response:

"Well, it will be interesting. I don't know who is going to take the risk on the other... Look, if you look at the studies of these things, when they get built, cost way more than they think. That's step one. Step two is there is operating costs. Who is going to take responsibility for that?" Scott said.

Scott's allies had urged him to answer those questions through a bid process. The thought was the private sector was so eager to show high speed rail could work in the U.S. (Japan's foriegn minister made a special trip to Scott's office in January to make his pitch) that companies would be willing to assume the risks and put up the remaining money for Florida's project.

It isn't exactly clear why Scott decided to not ask for bids. But it is clear Scott still wants federal money. Here's what he said this morning: