Bovo to wait until election is set to announce resignation date 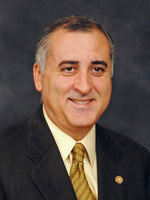 Rep. Esteban Bovo, the Hialeah Republican who has filed to run for the Miami Dade County Commission, said Tuesday he will wait until the county sets the special election date and qualifying period for the election before he decides when to resign from the Legislature. Bovo wants to represent the Hialeah-Miami Lakes district vacated by former Commissioner Natacha Seijas, who was ousted by voters in a recall election.

“I’m basically at their mercy and I’m looking to see what they have to say on Thursday,’’ he said. He said it is a personal decision, based on whether he wants to travel back and forth between Tallahassese and his district since he has an eight-month-old, and four other children at home.

“It’s really a call from my community on an issue that I believe I should be a participant in and that is reform county government,” he said. "People are screaming for cultural change in the way the county operates and this is a unique opportunity to make a difference."