" 'Politicians are not heroes,' Rubio says. 'But if you look at Jesse Helms, he had a tremendous amount of influence in this place.'

"Rubio respects how Helms fought hard as chairman of the Foreign Relations Committee, punching back at the princes of liberalism. Over five terms, he notes, Helms became a leading hawk. Rubio is already becoming one."

Helms, of course, helped write the Helms-Burton act to toughen the U.S. embargo against Cuba.

President Obama -- and family -- to Florida for shuttle launch

President Obama and his family will return to Florida and Kennedy Space Center on April 29 to attend the planned launch of the space shuttle, Endeavour, the White House said today.

Endeavour is scheduled to blast off April 29 on its final voyage, the second last before the shuttle program ends. Special preparations are also under way in case the commander's wife, wounded Rep. Gabrielle Giffords, is able to attend. The mission will be led by Mark Kelly, Giffords' husband. He is awaiting doctors' permission for his wife to attend the afternoon launch.

The department says its Human Rights Defenders Award "recognizes individuals or non-governmental organizations who show exceptional valor and leadership in advocating the protection of human rights and democracy in the face of government repression.'

Posted by Lesley Clark at 7:14 PM in Cuba | Permalink | Comments

Politifact rates Dem campaign against David Rivera, other GOP'ers, a "pants on fire"

National Democrats are going after 25 House Republicans who voted for a 2012 spending bill with radio and a web ad, but Politifact says they're torturing the truth.

"A new political ad from Democrats shows seniors running a lemonade stand, cutting the grass, and even stripping at a bachelorette party -- all to raise money to pay for Medicare.

"The stripper, dressed as a firefighter, bellows, 'Did someone call the fire department? Because it's about to get HOT in here!' The young women throw money at him while he dances around with a pink feather boa. (See the ad here.)

" 'Seniors will have to find $12,500 for health care,' the ad says, 'because Republicans voted to end Medicare.'

"So do grandparents have to go back to work because of a Republican vote? Not really."

National Journal has Cook Political Report "redistricting guru" David Wasserman crunch the numbers to determine which "certain unfortunate incumbents" will be "sucked into a ritual of panic" -- over whether or not redistricting will leave them with seats they'll able to win.

The 10 most "nervous" Republicans include just one from Florida: Rep. Allen West, with Wasserman noting that the district "may be the ugliest gerrymandered patchwork of precincts in the country, and West won one of the ugliest races in the country in 2010, unseating Democrat Ron Klein with a big lift from senior voters in Palm Beach and Broward counties.

"If new voter-approved anti-gerrymandering measures are enforced (and that's a big if), West's district will have no place to go but into neighboring Democratic precincts, helping to pave the way for Democratic former West Palm Beach Mayor Lois Frankel."

No Florida Democrats made the top 10 most endangered Dems.

Gov. Scott's Panhandle tour wraps with a walk on the beach

Scott spent five hours this morning doing satellite interviews with TV stations across the country about Florida's recovery. He met up with more reporters at the Lucky Snapper in Destin, where he nibbled on a plate of locally caught copia, greens and black eyed peas with the restaurant owner, Destin Mayor Sam Seever and a couple tourism officials. He mostly chit-chatted about his experiences in office so far, touching on how much his wife Ann likes her role as the state's first lady and bemoaning how long it takes to get anything done in Tallahassee.

He told reporters in a brief gaggle after lunch that he has not finished reviewing changes to the oil spill claims process overseen by D.C. attorney Ken Feinberg. He said he met with Feinberg on Thursday during a visit to D.C. to hear how the adjustments were going, but wants to get more feedback before commenting on Feinberg's efforts to make the process more transparent and efficient.

"My experience is if we sit down and get some specific ideas about how he can improve the process, he'll be receptive," he said. "He doesn't want pressure from either the attorney general or me."

The tour continued about an hour later in Pensacola Beach. There Scott met with Pensacola officials at a brief roundtable at the Holiday Day Inn Beach Resort Hotel and took a walk on the beach. He wore dress pants, a light jacket and his signature black leather boots. At a press conference after the beach stroll, Scott addressed lingering questions about why the state will not pursue a federal lawsuit against Transocean. The deadline to enter is today.

“It’s not in our best interest to be involved in somebody else’s litigation,” he said. 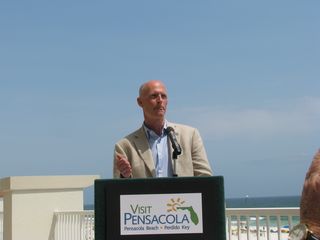 Scott was among several speakers who talked about gains the state has made since the spill. Tourism in Pensacola is actually higher compared to most years, said Ed Schroeder, director of Visit Pensacola. He credited increased tourists to BP marketing money and worldwide exposure of the city.

Still, an Escambia County senior scientist cautioned that concerns remain. Submerged oil mats exist within the beach's first and second sandbars, sending tar balls onshore after thunderstorms, said Chips Kirschenfeld, the county's water quality and land management division manager. BP may have cleaned up the beach, but that oil needs to be removed from the ocean.

"(Submerged oil mats) weren't here before the oil spill and they don’t need to remain here after the oil spill," he said. 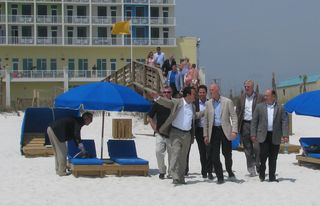 “ I have something to offer,” said Arza, who was once the go-to guy for former Gov. Jeb Bush’s education policy. Bush fondly referred to him as “colonel.” Arza was also one of the major forces behind current U.S. Sen. Marco Rubio’s rise to power in the Florida House, where he served as speaker in 2007 and 2008.

But before Rubio presided over his first session, Arza’s hard-hitting style met Miami-Dade’s former schools chief Rudy Crew. Arza also clashed with former Rep. Gus Barreiro, who alleged Arza used racially insensitive words to refer to Crew. He filed a Rules Committee complaint. An enraged Arza and his cousin then called Barreiro and left a string of inappropriate messages. Arza was charged with witness tampering, agreed not to run for office in 2008 and avoided a felony trial. He also sought counseling.

Arza's absence came at the worst of times for Rubio, who was on a political crash course with then-Gov. Charlie Crist, who had an easier time working around Rubio without Arza in the chamber. Still, Rubio had David Rivera to rely on.

Since he left office, Arza has worked as a consultant, grown more religious and moved to Palm Beach County (though he kept his Hialeah-area home). Political observes say he’d be the man to beat in his old district. A dogged campaigner, he was well respected for an encyclopedic knowledge of his constituents and even made sure to remember the names of their dogs.

The seat he left is occupied by Rep. Eddy Gonzalez, who plans to run for Hialeah mayor. So far Republicans Paul Crespo, Manny Diaz and Jessie Fortich have announced they’ll run for the seat.

Arza said he’s not sure he’d run yet.

“The kids are older now and there’s a lot of things that were hurtful in the past,” Arza said. “I need to talk to my wife and my priest. But he’s pretty busy these days.”

A Pinellas County legislator is at odds with his local sheriff over whether an Internet sweepstakes cafe the lawmaker has opened is against the law. State Rep. Peter Nehr's business, Fun City Sweepstakes sells phone cards.

But as the St. Petersburg Times reported today, for every $1 a person spends on a card, they also get 100 sweepstakes points to use at one of the business' 45 desktop computers. The computers can simulate the spinning images of a casino slot machine. You spin, and win, or lose. If you win, you can collect the winnings from the cashier.

"This is a legitimate business that has been vetted and found to be completely legal in the state," he told the Times. "I'm entitled like anyone else to open a legal business to earn money for my family."

Nehr sounded so sure about his business -- saying that it "has been vetted and found to be completely legal" -- that PolitiFact Florida decided to check it out.

A Florida House budget panel voted narrowly on Wednesday to keep an alive an effort to outlaw red-light traffic cameras.

The Legislature passed a law last year regulating the cameras. But Rep. Richard Corcoran, R-Trinity, cited a slew of examples from cities and states across the country where he said the cameras were not preventing accidents.

"This isn't exactly what we thought it was," said Corcoran, a freshman lawmaker who has been tapped to be House speaker in 2017. "Let's step back and figure out a way from scratch where we can make these intersections safer for our families."

Courts have thrown out many red-light camera tickets, he added, saying the problems with implementing last year’s bill are "overwhelming." Corcoran argued intersections could be made safer using other measures, such as changing the timing of traffic lights and improving signage and road painting.

After about an hour and a half of discussion, the appropriations committee sided with Corcoran -- even though law enforcement and other advocates cautioned that getting rid of the cameras would put drivers' lives in danger -- and cost Florida municipalities some $71 million in revenue from camera tickets.

Debate on three abortion bills got testy on Wednesday, with lawmakers saying Planned Parenthood only opposes the measures because they want to hang on to income from the procedures.

In discussion of HB 1127, a bill sponsored by Rep. Liz Porter, R-Lake City, requiring that women receive ultrasounds before undergoing an abortion, Rep. Ron Renuart, R-Ponte Vedra Beach, said that in 2008, 37 percent of Planned Parenthood's revenue comes from abortions. That's the real reason the organization opposes the bill, he said.

"It sounds to me like they don't want to lose business," he said. Rep. Porter echoed that sentiment, saying Planned Parenthood cares only about its bottom line.

During discussion of a later bill, Planned Parenthood lobbyist Stephanie Kunkel struck back, saying 97 percent of the organization's work focuses on education and prevention of unwanted pregnancies.

Kunkel did offer Porter praise for amending her bill so that women can decline to view ultrasound images and have them described to her before receiving an abortion, although doctors still must offer the option. Women whose lives are endangered or are the victims of incest and rape could provide documentation of those situations and avoid the informational offer altogether. Kunkel deemed that provision "cruel," saying it would force a woman to revisit traumatic experiences, and in some cases, such documentation may not be available.

During debate on that bill, Rep. Janet Cruz, D-Tampa, told the story of becoming pregnant at age 16 and rejecting the option of abortion because of her Catholic upbringing.

"We all subscribe to different values and different reilgions, but every woman has a right to her decision," Cruz said. She urged lawmakers not to return abortions to "back rooms" where women's lives are endangered.

Rep. Rachel Burgin, R-Riverview, is the sponsor of a bill that would limit abortions preformed if a fetus is "viable," which could be in the second trimester. Current law only limits abortions in the third trimester. In addition to limiting late-term abortions, Burgin's bill requires doctors who offer the procedure to receive ethics training and require that abortion clinics be owned by physicians.