Gimenez gets a flier sent to 'Mother Teresa'

At first, the flier attacking Carlos Gimenez appears no different from any other one sent to voters in the run up to Tuesday's election for Miami-Dade mayor. 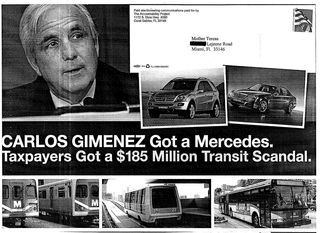 But look closer and this particular flier is addressed to an unlikely county resident: Mother Teresa. 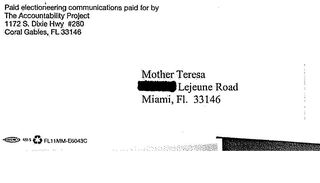 Keith Donner, chairman of The Accountability Project, the third-party political group that created the flier, said he did not send this particular piece of mail to Gimenez. This mailer has a stamp on it and, it appears, an address label.

Donner said he sends his mail pieces in bulk -- no stamps, and the address printed directly on the flier.