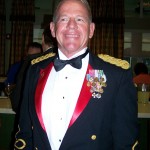 Mike McCalister, a Republican U.S. Senate candidate, violated U.S. Army regulations by wearing his uniform to a political fundraiser -- a move that further fuels the criticisms of veterans and service members who say he’s misleading voters to seem like more of a soldier than he ever was.

A retired colonel in the Army Reserve, McCalister has made his
military record central to his campaign, which has launched the
political newcomer into the top tier of a crowded field of Republican
candidates.

But his website and campaign speeches have been full of so many
strong-sounding claims that he’s now drawing fire from former subordinates, a high-ranking general at United Special Operations Command in Tampa and the vets groups Stolen Valor, which obtained
photographs of McCalister wearing his ceremonial uniform at a Feb. 16 Lincoln Day Dinner, a fundraiser hosted by the Highlands County Republican club.

"The retiree is not authorized to wear his uniform to political events," said U.S. Army spokesman Troy Rolan. He cited regulations that say current and former service members should only wear the
uniform to ceremonial events, such as Memorial Day, and should not wear the outfit to political functions.

“This is inappropriate,” said Ed Maxwell, a Jensen Beach Vietnam veteran and member of Stolen Valor member, a nonpartisan group of vets committed to blowing the whistle on candidates who misrepresent their service.

Maxwell, like nearly all of McCalister’s military critics, is a Republican who’s not supporting one of the other candidates, including Adam Hasner, George LeMieux or Craig Miller.

McCalister, 59, has refused to answer specific questions from reporters and Stolen Valor about his record. His campaign called Stolen Valor a “front group,” but failed to provide any evidence.