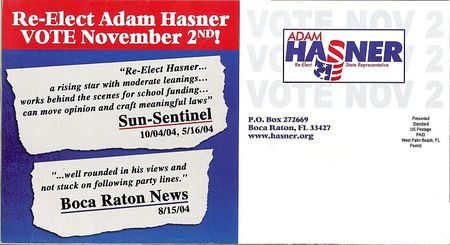 Incoming Florida Senate President Don Gaetz once said that he tries to speak "honeyed words so that when I have to eat them, they taste sweet."

The Republican U.S. Senate candidate who's stumping as an unwavering conservative hardliner. But he didn't always, notes Jack Furnari, a Broward Republican and blogger who unearthed an old Hasner mailer that bears the now-dreaded "m" word: "Moderate." Based on that and a few other mailers Furnari says in the BizPac review that the Delray Republican is a "moderate-conservative chameleon."

We didn't go that far, but in this piece, the Herald/Times noted that Hasner's campaign rhetoric doesn't always match his record.

Belated public apologies to Furnari as well. In 2010, in private email correspondence, I questioned how he could state that Crist was leaving the Republican Party when the governor had repeatedly denied it.