In this school of sorts, the coursework features walking tours of inner-city neighborhoods, exercises on how to balance a mock municipal budget — and a guest speaker who has pleaded guilty to charges of extortion, perjury and public-meetings violations.

Welcome to the Good Government Initiative, an effort to improve the quality of leadership in corruption-plagued South Florida.

At the heart of that lofty goal is this question: Can public officials be taught to avoid the mistakes of their ethics-challenged forbears — and to better serve their constituents in an often-toxic political climate?

“There’s an old saying that when the student is ready, the teacher appears,” said Katy Sorenson, the former Miami-Dade County commissioner who retired last year and founded the program. “And I think that people that are eager to learn seek that out and can learn lessons.”

The program’s inaugural class began meeting last week. The group comprises 19 state lawmakers, county commissioners, city council and school board members in their first term or first four years in elected office in Miami-Dade, Broward, Monroe and Palm Beach counties. In eight sessions between August and November, they will cover a syllabus ranging from land use regulations to dealing with the media.

Driving the program is the idea that elected officials — particularly rookies — can learn to ask more pointed questions, propose effective policies and work together at a regional level to tackle big problems. More here.

Do members of Congress get the same health insurance as rank-and-file federal employees?

U.S. Rep. Steve Southerland got a bit of national attention last week after a Tallahassee Democrat story quoted him as saying his salary and benefits are "not that much" when considering the hours he puts in at the House and how he had to give up his paycheck from the family funeral home business.

"And by the way, did I mention? They're shooting at us. There is law-enforcement security in this room right now, and why is that?" he said. "If you think this job pays too much, with those kinds of risks and cutting me off from my family's business, I'll just tell you: This job doesn't mean that much to me. I had a good life in Panama City."

The forum with Tallahasseeretirees turned to Southerland's own health insurance plan.

"The health insurance plan that I have is no different than any other federal employee's in the United States government," said Southerland. "I pay my portion."

Oh, really? See how his claim fared on the Truth-O-Meter.

Is Florida heading into recession again?

From The Miami Herald's Doug Hanks:

Consumer confidence in Florida plunged this month amid Wall Street turmoil, drama over the U.S. debt and general fears that an economic recovery was giving way to retreat. The head of the monthly survey by the University of Florida says the numbers suggest a recession has either already begun in Florida or is near.

“If past history of this index is any indication, we are in, or at least very near, a recession. We are not likely to know for certain until after the fourth quarter,” said Chris McCarty, director of the Bureau of Economic and Business Research at UF, which conducts the survey.

Last month’s preliminary reading of the index stood at 68. This month, it dropped to 62. A press release announcing the results this morning did not say whether July’s reading was revised. The survey’s record low of 59 was set in June 2008, about six months into the national recession that officially ended in the summer of 2009.

Florida's Prescription Drug Monitoring Program goes into effect on Thursday. Pharmacies will have to gather detailed information about who is prescribing certain medications and who is receiving them. The information will be tracked in a statewide drug database.

The program is designed to put an end to pill mills in Florida. These are pain management clinics that offer easy access to narcotics. Statistics show seven people die each day in Florida from prescription drug abuse.

Gaming and immigration on the agenda for Florida Chamber Foundation event

Gaming, immigration, constitutional amendments and redistricting are topics of educational panels at the Florida Chamber Foundation's annual Future of Florida event scheduled for Sept. 19 through 21 in Orlando. Also on the agenda, presentations by Gov. Rick Scott and Republican U.S. Senate candidates, Adam Hasner, George LeMieux and Craig Miller. (Missing from the agenda is candidate Mike McCalister.) Other topics for discussions include manufacturing, property taxes, health care and international trade, and summits on education and energy.

"Senator Rubio's mother suffered a stroke two weeks ago. Over the last 48 hours, she has experienced additional setbacks that require Senator Rubio to remain in Miami with her," said a statement from his office. The senator's father passed away last year during his campaign.

Posted by Marc Caputo at 7:10 AM | Permalink | Comments 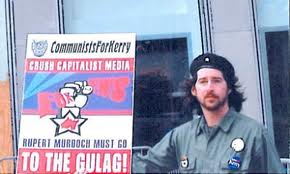 First, as we reported last week, McCalister wore his military uniform to a GOP fundraiser. That's a no-no. Then, the story also detailed how a sergeant major, Jeff Shera, noticed he broke Army regulations at MacDill by wearing the wrong cap. Shera also said the first time he met McCalister, after 2001, he wore a badge saying "Mike McCalister, PHd." (The influential Redstate blog has this take/photo lineup). 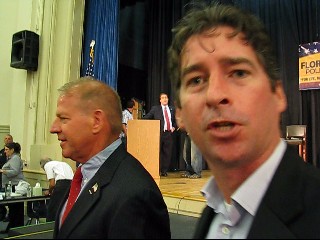 Now, word is surfacing that McCalister aide Jason Sager who tried to shut down questions about whether McCalister testified before Congress used to play dress-up as well -- as Che Guevara. It was all done in protest years ago to mock and undermine liberals. But it's something that caused Sager trouble when he unsuccessfully ran last year against fellow Republican Richard Nugent, who ultimately won the Hernando-Citrus heavy congressional district.

Sager's outfit and activities on behalf of a group called "Protest Warrior" were just too much for some tea partiers, as this Hernando Today story shows:

"Protest Warrior was a satirical, covert group who crashed anti-war and anti-George Bush protest events and blended in with the group. Members would hold up mock signs purporting to espouse the same liberal views.

"But Mattos, 62, said she has since learned that Protest Warrior had some overt racial discrimination overtones to it and she cannot be a part of that. She found posters on the group's website disturbing." 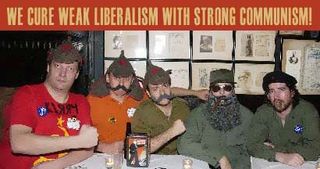 For many Cuban-American Republicans (70 percent of the GOP electorate in Miami-Dade), dressing up like Che is no laughing matter. Even though Sager was on the side of conservatives and trying to bash liberals, it's just too subtle a form of humor for Miami's exile community to chuckle about. That's especially true when one of your buddies dresses up like Castro.

Rick Perry becomes a millionaire while in office

Since his first race for office more than a quarter-century ago, Gov. Rick Perry has emphasized his roots as a rural farmer.

Yet Perry's bank account no longer reflects those humble beginnings as his bottom line has soared in recent years, records show, thanks largely to a handful of real estate deals that critics allege were achieved through the presidential candidates' political connections.

In just about every campaign Perry has run since 1989, allegations of his using his position for financial gain have come up. It's an issue that Perry long ago accepted would linger as long as he remains in the public eye.

"I've been in politics long enough to know that this is just a part of doing business," Perry told the Star-Telegram in 1998. "I know full well, as my wife knows, that our private lives, particularly on the financial side, becomes fair game."

Will RPOF's P5 straw poll be a flop?

What if you threw a big mock election and nobody bothered to campaign?

If it’s Florida, that election still could be a big deal.

On Sept. 24 in Orlando, 3,500 ardent Republican activists in this must-win state cast votes for their preferred presidential nominee. The three times the Florida GOP has held such straw polls, the winner went on to win Florida’s primary and the presidential nomination — Ronald Reagan in 1979, George H.W. Bush in 1987 and Bob Dole in 1995.

This year, though, the so-called “Presidency 5” straw poll has most of the presidential campaigns skittish, confused or decidedly unenthusiastic. Only Herman Cain, Jon Huntsman and Ron Paul have committed to participate in the mock election, which essentially means showing up that Saturday afternoon and giving a speech.

Michele Bachmann became the first major Republican presidential candidate to barnstorm the state this year, capping a six-city tour Monday in Miami where she sipped cafecitos, paid homage to Cuban Americans and kicked off a month of intensive GOP politicking in the state.

“We’re going to be all over Florida because Florida chooses presidents. You choose presidents,”’ Bachmann told dozens of supporters and onlookers at Versailles Restaurant in Little Havana.

“I want to win Florida twice with your help: Once in the primary and then the general,” she said. “And that’s how we will make Barack Obama a one-term president.”

That last line, the de facto trademark of the fiery Minnesota congresswoman, was repeated word for word by the crowd.

But is it likely that she’ll be the one to topple Obama?