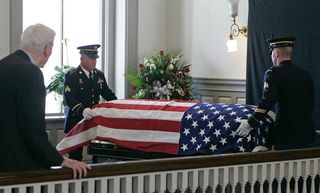 Former Florida Gov. Claude Kirk returned to the old Capitol Friday, where a steady stream of well-wishers came to pay their last respects as he lie in state.

The famously colorful governor, who became the first Republican elected in Florida since Reconstruction, left as many stories as he told.

“We became fairly good friends,’’ said Askew, 83, who defeated Kirk in 1970. “You don’t become better friends by running against each other. But he did some things that were very important to the state.’’

The St. Petersburg Times, NBC News, the National Journal and the Florida Council of 100 announced Friday that their Republican presidential primary debate will be Jan. 30 at the St. Pete Times Forum in Tampa.

This debate, first announced in April, will fall on the eve of the Florida primary set for Tuesday, Jan. 31.

The St. Pete Times Forum is the site of the 2012 Republican National Convention in August. It is the first time that presidential primary candidates will debate in the arena where one of them will return to accept the nomination.

The debate will be broadcast nationally on MSNBC and statewide on NBC stations.

Earlier Friday, the Republican Party of Florida and CNN announced a debate for between Jan. 22 and Jan. 31 in Jacksonville.

RPOF to join with CNN to host a primary debate

More proof that Florida will be the primary place to be: CNN and the Republican Party of Florida announced today they will co-host a debate for Republican candidates in Jacksonville prior to the Jan. 31 primary.

“With the Florida Republican primary now scheduled for Jan. 31, that state’s central role in helping Republicans choose a nominee is now secure,” said Sam Feist, CNN Washington bureau chief and senior vice president in a statement. “CNN is proud to present voters in Florida an opportunity to hear from the candidates one final time before they head to the polls."

Said Gov. Rick Scott: “After national debates in Tampa and Orlando, this latest partnership with CNN for a debate in Jacksonville in January demonstrates the crucial role Florida will play, not only in the Republican Presidential Primary, but in the general election next November.”

NBC is also interested in capitalizing in Florida's mega media state credentials. It is in conversations with the St. Petersburg Times about hosting a primary debate in Florida as well.

Today the Republican Party of Florida and CNN have entered into an agreement to co-host a nationally-televised debate on a date between January 22 and January 31. The move ensures Florida voters, and the nation, will hear directly from the Republican presidential contenders just before Florida’s January 31st primary. The debate will be held in a venue in Jacksonville.

RNC: Florida GOP will lose half its convention delegates but that's it

Three senior officials with the Republican National Committee spoke on background to reporters Friday about the 2012 primary calendar in light of Florida's decision to upset the apple cart. Here are some take aways:

* Florida will definitely lose half its delegates. RNC officials are firm about that. There will be no waiver or negotiations. As to whether the penalized states will be able to get floor passes for all delegates, as in 2008, RNC officials didn't know.

* Florida will only be punished once. After it loses its delegates, it won't lose anything more. (The Republican Party of Florida submitted rules on Friday to the RNC that would divide up most of the state's delegates -- estimated to be about 49 now -- to candidates based on the vote in each congressional district, with a small number going to at-large candidates, RNC spokesman Brian Hughes told the Herald/Times.)

* The decision by Florida, Arizona and Michigan to move up their primary dates will now force three of the traditionally early primary states to face penalties if it sets off a chain reaction of switches, as expected. New Hampshire, South Carolina and Nevada will also lose half their delegates if they move their primaries before Feb. 1. Iowa will not be punished because its does not bind its delegates to the caucus results.

*The convention will definitely remain in Tampa.

Continue reading "RNC: Florida GOP will lose half its convention delegates but that's it" »

Judge says state is polluting Everglades with its runoff

Here's the press release from Earth Justice, which filed the suit:

A federal judge has ruled that water running south into the Loxahatchee National Wildlife Refuge has been exceeding pollution limits designed to protect one of America’s most significant environmental treasures. Specifically, water coming off the state-operated Stormwater Treatment Areas exceeded the official limits that the state of Florida set for phosphorus between 2005 and 2009, ruled U.S. District Judge Frederico Moreno.

“We know that too much phosphorus, which comes from agricultural pollution, upsets the delicate balance in the Everglades,” said Earthjustice attorney Alisa Coe. “Judge Moreno affirmed what we’ve been saying – that the state limits must be met and pollution must be reduced.” The ruling is part of a long-running legal case that stretches back to an historic 1992 consent decree between Florida and the federal government.

Was Florida first to require drug testing for welfare?

A recent chain e-mail cheers on Florida's new law requiring drug-testing for welfare applicants: "Great going, Florida. You set the stage for the other 49 States to join! Kudos to Republican Governor Rick Scott for having the correctness and guts to move forward on this critical issue ! ... Florida is the first state requiring drug testing to receive welfare!"

Our eyes lit upon the message's first factual claim: "Florida is the first state requiring drug testing to receive welfare!"

Is this true? PolitiFact Florida checked it out.

The man whose name and signature appears on hundreds if not thousands of ethics opinions is retiring after 35 years.

Phil Claypool, 61, joined the legal staff of the Florida Commission on Ethics in 1976, two years after the Legislature created it. He took the job fresh out of law school at Florida State. Today is his last day.

He became executive director five years ago when longtime staffer Bonnie Williams retired. He retained his title and duties as general counsel because he loves practicing law.

Dems blast GOP primary change for its 'disregard for bipartisanship'

“Once again, Republicans in Florida have shown a total disregard for bipartisanship and following the rules of the road,'' Smith said in a statement. "Today’s decision is a slap in the face to their own party and the bipartisan rules agreed upon over a year ago to ensure an orderly primary process.”

Two of the three Democrats on the 9-member panel voted against the move to leap frog other states and face a loss of delegates at the national party convention. Rep. Cynthia Stafford, D-Miami, a member of the committee said she listened to many Floridians, including many Republicans who disagreed with the early primary.

“I believe that Florida should respect the integrity of the process and comply with the rules that both political parties agreed to. I don’t want the voices of Floridians to be diminished and the state penalized because Florida failed to adhere to the agreement.”

Rick Santorum sees a conspiracy in Florida pushing up its presidential primary to Jan. 31. In a FOX News interview last night, Santorum said "somebody in Florida" is working to shorten the primary time for Mitt Romney or Rick Perry. He takes a shot at House Speaker Dean Cannon, though not by name, noting Cannon is a Perry supporter.

"I'm sure they'd like to have the election tomorrow," Santorum said. "By moving up the calender, you help the favorites."

Posted by Alex Leary a