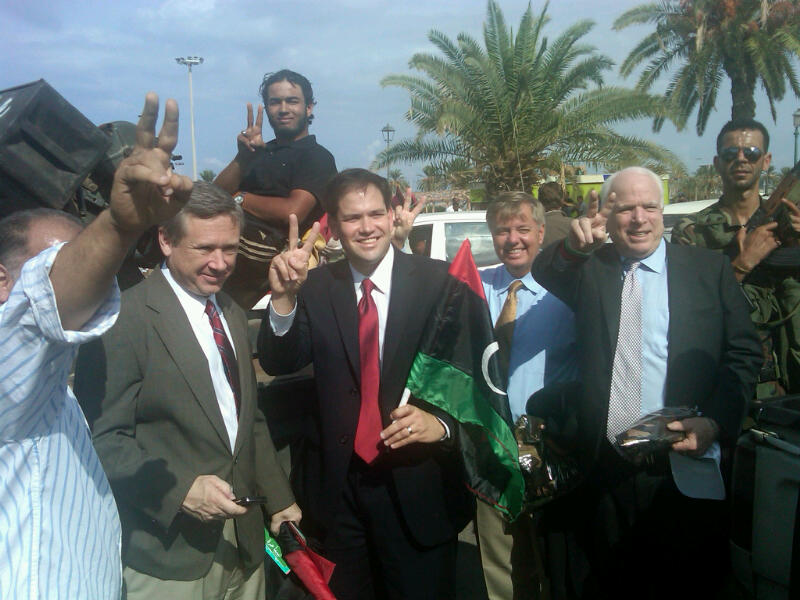 Fresh off a visit to the newly liberated Libyan capital of Tripoli, Sen. Marco Rubio, R-Fla., said the new government in the North African nation needs international help with its police force, its prisons and its fledgling democracy.

Rubio said he told those he met in Tripoli that people who are oppressed in other parts of  the world have looked to the Libyan revolution as inspiration. He also said the American role in aiding the transition is vital for the region.

"All in all, we're pleased with the progress they've made," Rubio said. "We're very happy to see the pro-American enthusiasm that we encountered. And we have hope for Libya's future. Five years from now, three years from now, we could have a nation in the northern part of Africa that is Islamic and Arab, and yet pro-American and a democracy. And our ally in confronting the problems of the region and the world. That's the opportunity before us."

Last week at the United Nations, President Barack Obama urged Libyans to continue pressing for democracy. He told them that "the journey ahead may be fraught with difficulty," but "everything you need to build the future you seek already beats in the heart of your nation..."

Obama met privately at the U.N. with Mustafa Abdel Jalil, the chairman of Libya's new government, the National Transitional Council. The four Republican senators also met with Jalil on Thursday, Rubio said, as well as the transitional prime minister.

The new government is very concerned about its own orderly transition, Rubio said. That includes avoiding crimes of retribution and human rights abuses, "the kind of things that happen after an armed conflict in any country," he said, particularly one emerging out of the four-decade rule of Moammar Gadhafi.

"They recognize that nothing would set back the legitimacy of the Council more, and the ultimate revolution more, than stories about how people are now seeking retribution and taking vigilante justice."