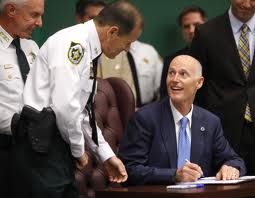 Gov. Rick Scott said Monday he is "getting close" to finalizing his legislative agenda, which he promised to have ready after the Presidency 5 events last week. Meanwhile, take a look at the draft spreadsheet of legislative issues put together by his staff, (before the current chief of staff was in office.) Download Scott DRAFT 2012 Legislative List [1]

The proposals are divided into Tier 1 and Tier 2 categories and a section on "budget priorities." Among the Tier 1 ideas are PIP reform, energy, multi-state health insurance, higher education reform, immigration, court reform and linking classroom spending to school performance.

The second tier includes a gift to one politically potent group the governor and Republican-led legislature angered quite a bit last year: police and firefighters. The governor wants to reverse the law that made most "special risk" employees retire at age 60, instead of 55.

Matt Puckett of the Police Benevolent Assocation said he was encouraged by the governor's change of heart, given the fact that special risk retirees die sooner than other government workers. "It's good he is recognizing the issue,'' Puckett said. "We'll see how much he pushes for it." The PBA has sued the governor over its attempts to privatize South Florida prisons and, Puckett concluded of Scott: "He seems to not like us."

Scott spokeswoman, Amy Graham, emphasized the list is a draft. "Look for a more refined version of this list,'' she said. "The priorities will be jobs, lowering the cost of living and building on the progress of last session."

Here are some of the most interesting elements of the draft:

* PIP -- The governor wants reform of the Personal Injury Protection program for auto insurance and sees it as key to his tort reform campaign promise.

* ENERGY -- Scott sees a "leadership" gap on energy issues and "is likely" to pursue a new renewables bill this session that will also focus on demand side management -- that's bureaucratese for energy efficiency. The big question is what direction will the governor go? With the utilities -- who argue Florida's requirements are too expensive at a time when states like North Carolina and Texas have more aggressive programs that are less expensive? Or with consumers -- who argue that more emphasis on energy efficiency postpones the need for utilities?

* EDUCATION -- The governor appears to be reviving the proposal to require a percentage of a school's budget be spent on the classroom with a plan to require the classroom spending in districts "not meeting standards." He also is considering asking legislators to adopt the Texas approach to higher education "and better link job market demands to degrees." A Tier 2 priority is creating "Education Spending Accounts" so that parents can take money from the public school system and spend it on outside educational needs.

* PUBLIC PENSIONS -- Unnamed reforms to the Florida Retirement System appear on the governor's agenda again this year as a Tier 2 priority. Police, paramedics and firefighters will be stroked, however, this political year as the governor considers reversing his proposal -- and the legislature's passage -- of a law to raise the retirement age for special risk workers from 55 to 60.

* FEE CUTS/MERIT PAY -- The governor prosposes a series of proposals that result in a net reduction in the state budget but doesn't appear to offer off-setting cuts in spending. For example, he proposes repealing the 2009 motor vehicle fee increases (including a 35 percent increase in annual tag fees that ranges from $5 to $11.40, the doubling of the initial vehicle registration fee and the increases to driver license fees and renewals.)  He also suggests giving some employees raises, paying for the unfunded teacher merit pay program.

* SPENDING CUTS -- It is not clear where the governor would get the money to pay for the fee reductions and spending increases. It is possible he is hoping to get some of that money but taking it from local government. He proposes withholding the savings local governments received when the state required employees to have 3 percent of their salaries pay for their retirement benefits, thereby saving cities and counties millions in retirement costs.