« PolitiFact gives Rubio a 'false' rating for his statements on parents' arrival | Main | FL Hispanic community -- it's not just for Cubans any more. Or Puerto Ricans. Or Mexicans.. »

In Marco Rubio flap, Random Pixels proves Cubans were exiles prior to 1959

Bill Cooke with the Random Pixels blog picks up where we left off in recent reports -- that Sen. Marco Rubio factually lays claim to being the son of Cuban "exiles" even though his parents came to the US before Fidel Castro took power.

Rubio, however, did have a misleading Senate biography that said his parents came to the US after Castro, in 1959. They came in 1956, during Batista's dictatorship. The biography has been changed.

But the controversy over whether he's an "exile" lives on. The fact that this is even a matter of debate speaks to the cracked looking glass of our politics. A plain reading of the word "exile" shows that it applies to those who live away from their homeland for a prolonged period of time.

No matter, liberals are using a Washington Post story to suggest Rubio was lying when the Republican said he was the son of exiles (more here).

Now Cooke weighs in: Miami has been home to many who, years before Castro even thought of taking power, have called themselves "exiles."

Here are a just a few of the many articles the old Miami News published before 1959 that refer to Miami Cubans as "exiles."

His post is here, adorned (not embellished) with some interesting news clips. One shows how Fidel was perceived as a hero by many, before his regime descended into totalitarianism. Then there's the one below that shows even Batista was an exile: 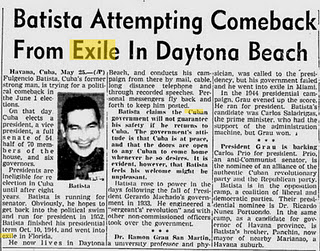