Even Burmese pythons have Washington lobbyists 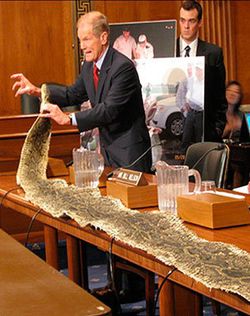 When Burmese pythons began slithering across Everglades levees in increasingly alarming numbers, state water managers petitioned the federal government to crack down on the pet trade’s sale of the giant snakes.

In the five years since, a string of studies, congressional hearings, articles and nature shows — not to mention bad sci-fi movies — have painted the python as a monstrous ecological menace that threatened to spread to other states.

But the proposal to ban the import and interstate sale of Burmese pythons and eight other large exotic snakes has stalled, swallowed up in White House bureaucracy for nearly a year.

A bipartisan group of lawmakers has written letters urging the Obama administration to approve the snake ban — among them, Democratic Sen. Bill Nelson last month, Tampa-area Republican Rep. Bill Young this month and Miami Republican Rep. Ileana Ros-Lehtinen last week. Despite the pressure, the effort to declare the snakes “injurious species’’ through a cumbersome administrative process called the Lacey Act remains in doubt.

The proposal has been buffeted by surging anti-regulatory fervor in Washington and scientific controversy over whether the snakes really pose much of a risk beyond South Florida.

The fact that the snakes acquired lobbyists may explain a few things as well.

The U.S. Association of Reptile Keepers, backed by a small but passionate group of snake breeders and collectors and a New York law firm, has mounting a campaign shrewdly positioning the python restrictions as “job-killing’’ federal red tape based on shaky science.

“This thing has tons of problems and no redeeming qualities,’’ said ARK President Andrew Wyatt. “A Lacey Act listing isn’t going to change one thing on the ground in South Florida now. It is going to put people out of work.’’