The Daily Show strikes again: Pam Bondi plays along, hands them a cup 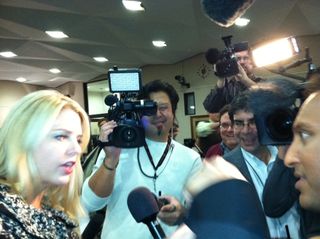 Attorney General Pam Bondi was ready when Comedy Central reporter Aasif Mandvi approached her after her press conference on Thursday.

"You supported the TANF drug test bill and I am just wondering if today you would be willing to undergo a drug test of your own as somebody who receives taxpayer money?" asked the reporter for Jon Stewart's "The Daily Show," just as he had asked Gov. Rick Scott on Wednesday. It's a reference to the bill legislators passed last year requiring all welfare recipients to pass a drug test but the measure was challenged by the Florida chapter of the American Civil Liberties Union and put on hold by an Orlando court. Gov. Rick Scott is appealing the ruling and Bondi's office is defending it.

Bondi pulled out a platic cup? "Well, that's very interesting that you should say that,'' she said. "Because as attorney general, I'm always prepared."

"You have a sample of your urine!,'' Mandvi exclaimed.  "Is this really your urine?"

His cameras followed Bondi as she and her entourage walked away. "Thank you have a great day,'' Bondi said. "My name's on the top." 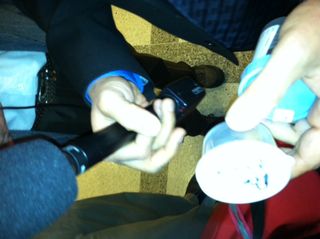