« Newt Gingrich tries to make FL a 2-man race. But is it too late? | Main | 'Hispanics for Ron Paul' launches in FL with Miami-centric group » 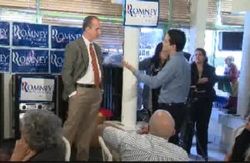 What would political reporters and activists of all stripes do without the pro-immigrant DREAM Act?

Republicans see Democrats as playing cynical ethnic politics (Obama and a Democratic-majority congress failed to pass it for 2 years). Democrats see Republican opposition as sure way to keep Hispanics from voting Republican.

And Republican Mitt Romney's presidential campaign gets dogged with DREAM Act questions at the mere mention of his Miami supporters, Reps. Mario Diaz-Balart and Ileana Ros-Lehtinen. They support the act. Romney said he'd veto it, that it's a "handout."

So it's little surprise that pro-DREAM Act supporters busted up a Diaz-Balart event for Romney yesterday. Here's CBS4:

Congressman Mario Diaz-Balart, who was rallying support for frontrunner Mitt Romney Friday, was interrupted during the event by supporters of the Dream Act.

The congressman hosted a Cafecito in support of Romney at a Doral restaurant, and Romney wasn’t the only focus at the rally. Supporters pushing the Dream Act were also in attendance at the restaurant.

Under the provisions of the DREAM Act, qualifying undocumented youth would be eligible for a 6 year long conditional path to citizenship that requires completion of a college degree or two years of military service.

One of the students involved with the Dream Act confronted Diaz-Balart, asking him why he supports Romney if Romney is not a supporter of the Act.