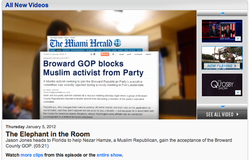 The Daily Show last night poked fun at the Broward Republican Executive Committee for blocking Nezar Hamze from membership in September. A denouncer of Hamze, Republican Congressional candidate Joe Kaufman, gets ribbed as well. But he gets national TV attention. So why complain?

Here's the top of The Miami Herald story briefly featured in the piece:

Islam and tea-party activism clashed at a raucous meeting Monday night when a group of Broward County Republicans blocked a Muslim activist from becoming a member of the party’s executive committee.

Republicans, who changed their rules to publicly vet Nezar Hamze and then vote on his application by secret ballot, said they didn’t oppose him because he was a Muslim — but because he is associated with the Center for American-Islamic Relations, whose Washington-area affiliate was an unindicted co-conspirator in a federal terrorism indictment.

Hamze, director of CAIR Florida, said his local group hadnothing to do with the suspect activities in Washington. He said CAIRadvocates for civil rights for Muslims, who have been unfairlytargeted ever since 9/11.

“I’m aligned with Republican values. And I want to serve the party,” said Hamze, who earlier told a reporter that any effort to block him was the result of anti-Islamic “bigotry.”

At times, when he addressed the packed room at the Sheraton Suites in Fort Lauderdale, a few members shouted out among the crowd of about 300.