Doug Darling, the executive director of Florida's economic development agency, is resigning from his post, according to a letter he sent Gov. Rick Scott on Thursday.

The resignation comes less than a year after Darling accepted the position as head of the state's new Department of Economic Opportunity.

Darling's effective date of resignation will be Feb. 29, but he has requested to have his last day on Tuesday (Jan. 31).

A post from Naked Politics, yesterday, broke the news:

Doug Darling, a key job-creation advisor to Gov. Rick Scott, is resigning after eight months on the job, sources tell the Times/Herald.

Darling has been director of the newly-created Department of Economic Opportunity (DEO), a post that paid him $125,000 a year.  He was the point man in a Scott-inspired effort to achieve better coordination of Florida's multiple economic development programs.

A retired high-ranking member of the U.S. Marine Corps, he previously served as chief of staff to the state's former environmental secretary, Mike Sole, and was chief of the state Division of Accounting and Auditing under former CFO Alex Sink.

Controversy found its way to Darling's doorstep in November after he told Florida news outlets that millions of dollars were shelled out to Florida businesses in the form of financial incentives to create jobs, but they hadn't fulfilled the terms of their contracts.

Word of Darling's departure began circling through the halls of the Capitol late Thursday afternoon. Darling did not respond to a message seeking comment. Sources say that his interim replacement will be Cynthia Lorenzo, who serves as secretary of the Agency for Workforce Innovation (AWI), the state employment agency.  --Steve Bousquet 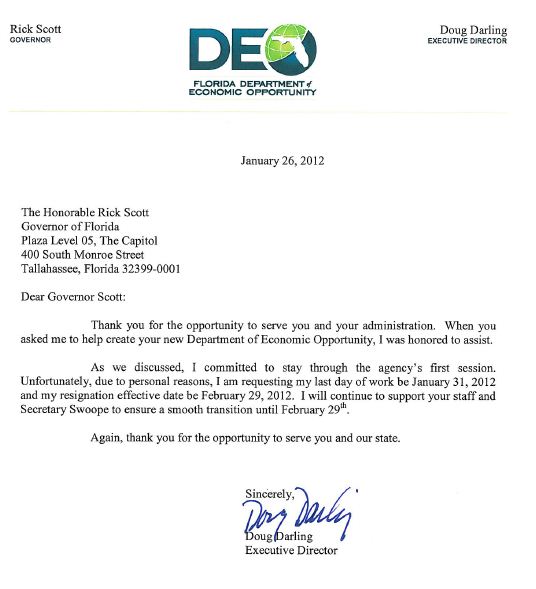