Florida stadiums not sheltering the homeless on off-nights? Pay up, lawmaker says

There are dozens of homeless people who sleep on the street every night just blocks from the shiny AmericanAirlines Arena in downtown Miami.

According to an obscure law, AAA should be acting as a shelter for the down-and-out on nights when Lebron James isn’t throwing down dunks in front of late-arriving A-Listers, or other events aren’t taking place in the 20,000-seat space.

AAA, and several stadiums across the state, have been collecting monthly checks from the state as part of a $271 million program to advance economic development through sports facilities.

But at least two legislators want the stadiums to refund a good chunk of that money, citing a law that requires any pro sports facility receiving financial assistance from the government to act as a shelter for the homeless on non-event nights.

Sen. Mike Bennett (R-Bradenton) and Rep. Frank Artiles (R-Miami) have filed bills that would require stadiums to return money to the state if they have not been complying with the homeless shelter law.

“These organizations have failed to follow the law for over 20 years," said Artiles, in a statement ."This is the simply the State of Florida holding them accountable."

SunLife Stadium, home to the Miami Dolphins and (until this Spring) the Florida Marlins, has received $37 million from the government since 1994, and the AmericanAirlines Arena has taken $27.5 million since it was built in 1998.

Here’s a list of all the stadiums and spring training facilities in the state that have collected state funds over the years. It’s unclear whether any of them are acting as homeless shelters on off-nights: 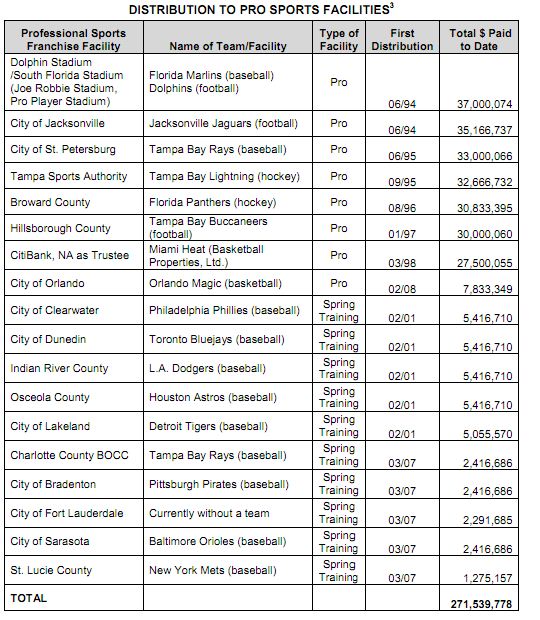