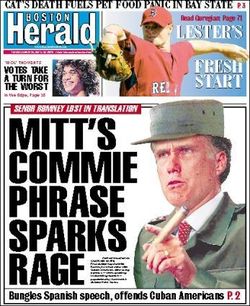 Mitt Romney's 2007 gaffe, where he quoted Fidel Castro and mis-attributed the line to Hugo Chavez, was the subject of mockery in the former Massachusetts governor's hometown tabloid and is now the grist of fellow Republican Newt Gingrich's latest radio ad that, as we reported earlier, is playing on Spanish-language radio in South Florida.

The ad doesn't stop with Castro. It bashes Romney's hardline immigration stance as well. We had a portion of it earlier, now here's the actual sound of it, which is guaranteed to get blood boiling even if you don't speak Spanish because it leads off with Castro: Download MITTAD

Here's the text in English:

Fatherland or Death, we will prevail... (sound byte by Castro)

Mitt Romney is a government liberal, from the state of and similar to Kennedy

He is the most anti-immigrant candidate.

Mitt Romney may have the fame, but he does not have the substance to be our President.

In Contrast, Newt Gingrich is a candidate that has committed himself to the Hispanic community. A Republican similar to Ronald Reagan, with experience.

Unlike Romney, who uses statements from Castro, Newt Gingrich has fought against the regime with Lincoln and Ileana to approve Helms-Burton; he supported the formation of Radio and TV Marti; and is in favor of holding the Castro brothers accountable for the shooting down of the Brothers to the Rescue airplanes.

Newt Gingrich has given his word to the Cuban American community in writing and will not let us down. This January 31st vote for Newt Gingrich by punching number 12 in your ballot.

People chuckled when presidential candidate Mitt Romney, a Mormon raised in Michigan and elected in Massachusetts, bungled the names of Cuban-American politicians during a recent speech in Miami.

Castro has closed his speeches with the phrase — in English, ”Fatherland or death, we shall overcome” — for decades.

"Clearly, that’s something he was ill-advised on or didn’t do his homework on,” said Hialeah City Council President Esteban Bovo. “When you get cute with slogans, you get yourself into a trap.”

“Hugo Chavez has tried to steal an inspiring phrase – Patria o muerte, venceremos,” Romney said. “It does not belong to him. It belongs to a free Cuba.”